We have tested the Merida Reacto Team-E, ready to win

The Merida Reacto Team-E 2021 is one of the aero bikes that still receives the most praise for its aesthetics, but we could say that this is by no means its greatest asset. This is the fourth generation of a model launched in 2011 that has managed to adapt to new trends to be more versatile even improving its performance. 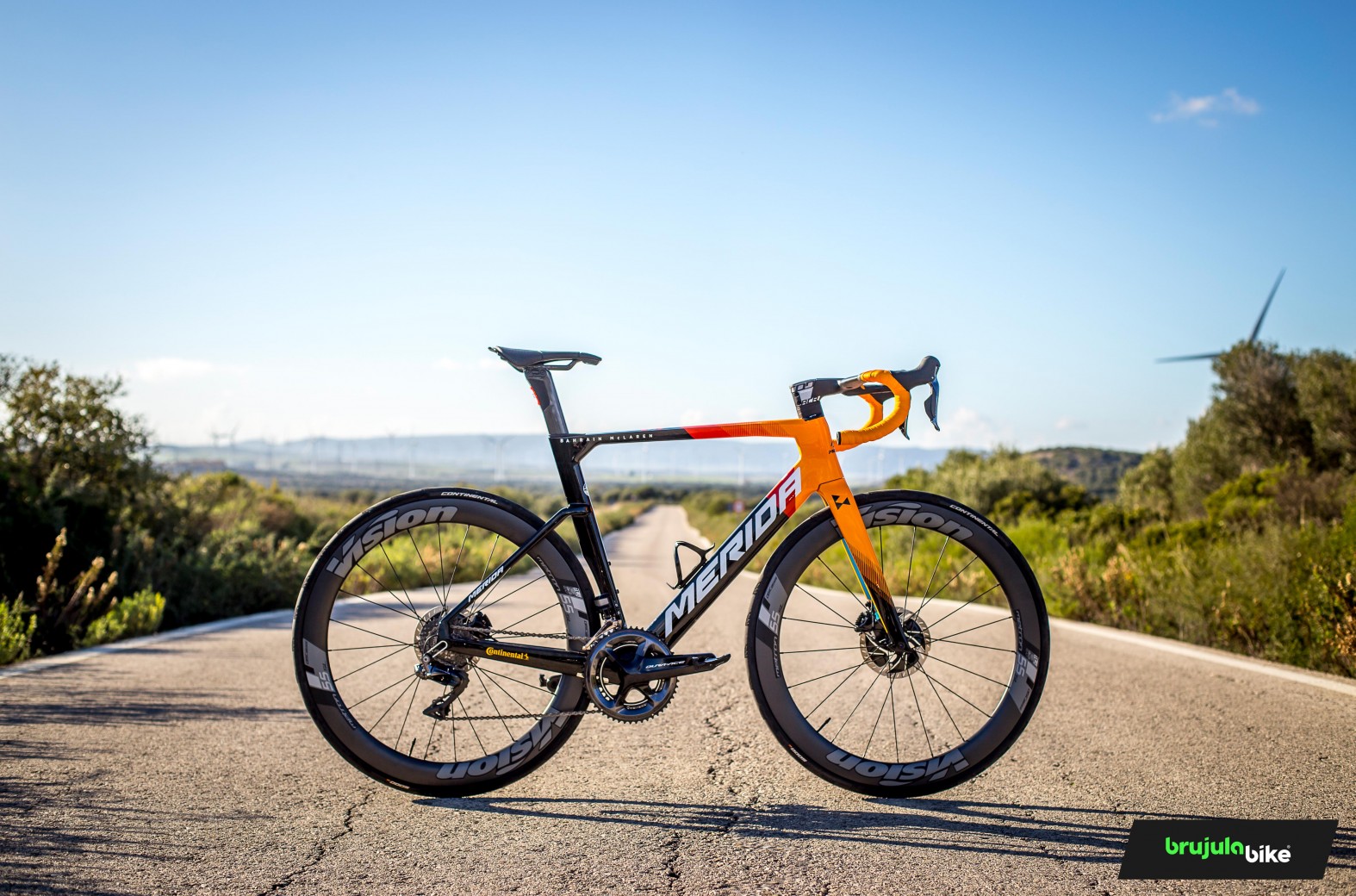 After the great acceptance that this version has had among the members of the World Tour Bahrain-MClaren team, we have been lucky enough to test it and here is our overview of this bike.

Although it has always stood out for its good aerodynamics, in Merida they proposed to improve this point even more, without neglecting other aspects that would make it more balanced at the same time. The stiffness, the weight and the comfort in motion have been the other points to take into account in the development of the Reacto.

At a glance you can see what the intentions of this bike are. It has a frame made of CF5 carbon, the brand's star carbon, reserved for top-of-the-range models and racing bikes, in which the adjustments in the fibres used to save weight and improve performance are a priority. It focuses on stiffness, in order to achieve the best possible transfer of forces. 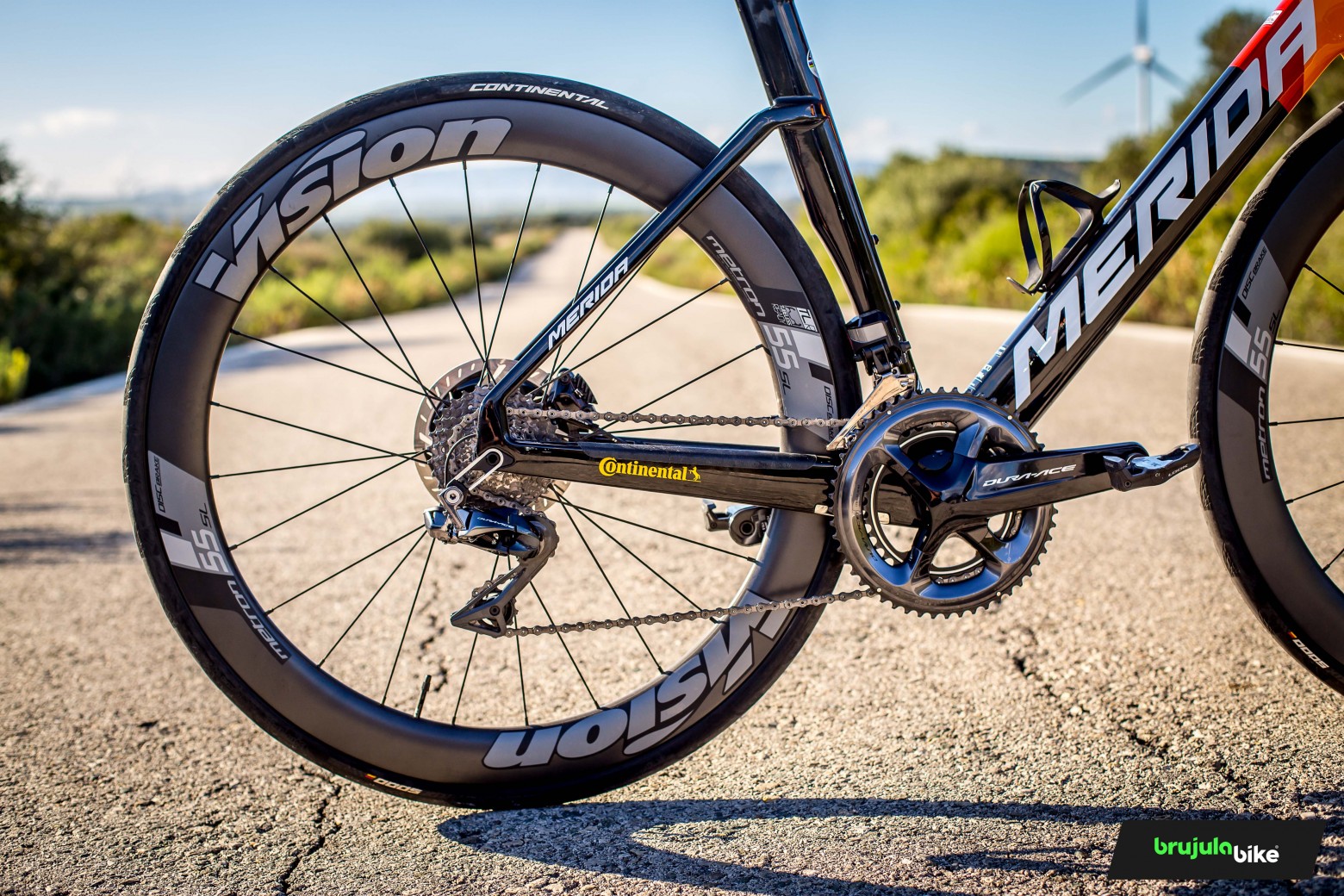 We can find sharp lines, tubes with flat sections and large size that mark its aerodynamic character. The head tube is placed entirely in a horizontal position, and the rear part contains the seat post closure, which is integrated and hidden with a rubber band, keeping the lines clean and helping to reduce turbulence. 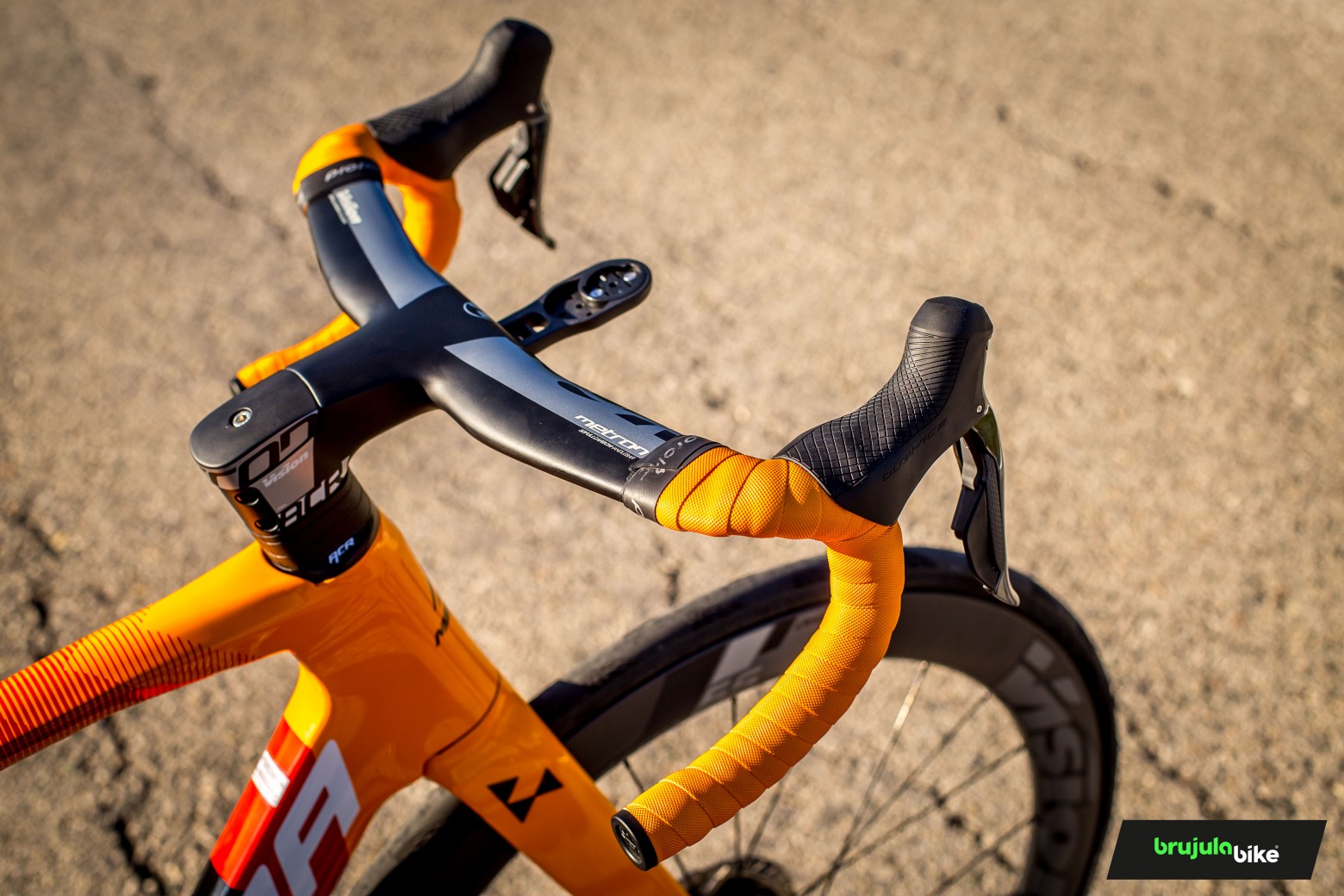 At the front we have a steering pipe that leaves the complete bearing and steering cover integrated at the top, along with separators that lead to the wiring set and have a design to subtract as little as possible in terms of aerodynamics. It is complemented by the Vision METRON 5D ACR integrated handlebar and stem assembly which offers exceptional aerodynamics as well as weight savings. All the wires are completely hidden in it, resulting in a cockpit with a clean look. Moreover, according to the manufacturer, the whole integration of the wiring allows a saving of 2 watts. 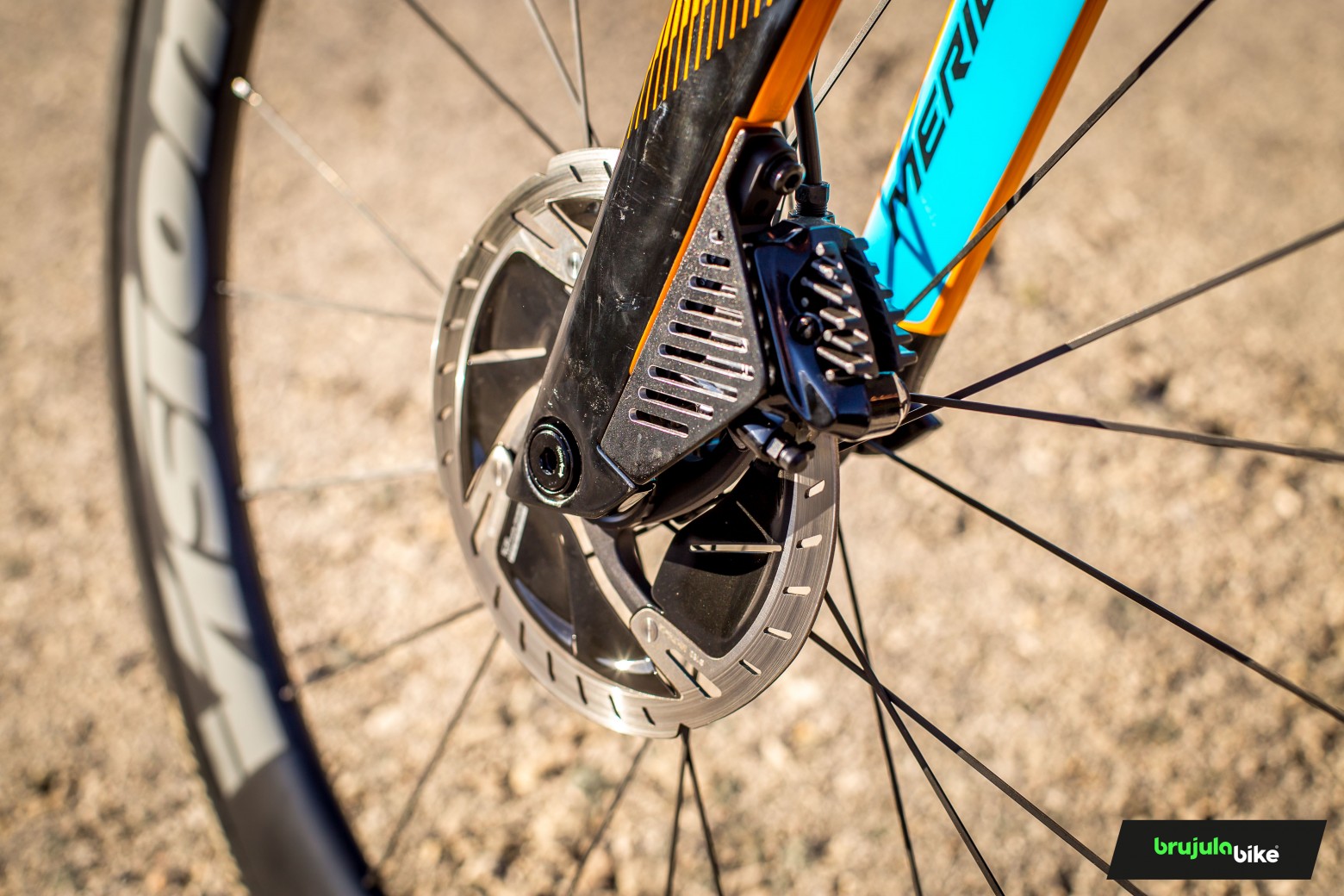 The lower part of the head tube also integrates the straight-cut fork head that accompanies the frame, made of the same carbon and which carries the guide of the Shimano Dura Ace flat-mount front brake line inside. The caliper is covered with a disc cooler which helps the ventilation of the Shimano RT900 160 mm. These second generation heat sinks have been integrated into the fork and rear of the frame to reduce aerodynamic drag and, depending on the brand, reduce heat build-up by 35%.

Its generously sized diagonal tube with a flat section is joined to a robust bottom bracket using a BB86.5 box. The large pods start from it, giving rise to a wide wheel arch able to accommodate tyres of up to 700x30C. They have a direct mount tip designed to reduce the moving parts near the derailleur and thus gain in precision when changing. As in the front part, it has a flat mount caliper and the heat sink. 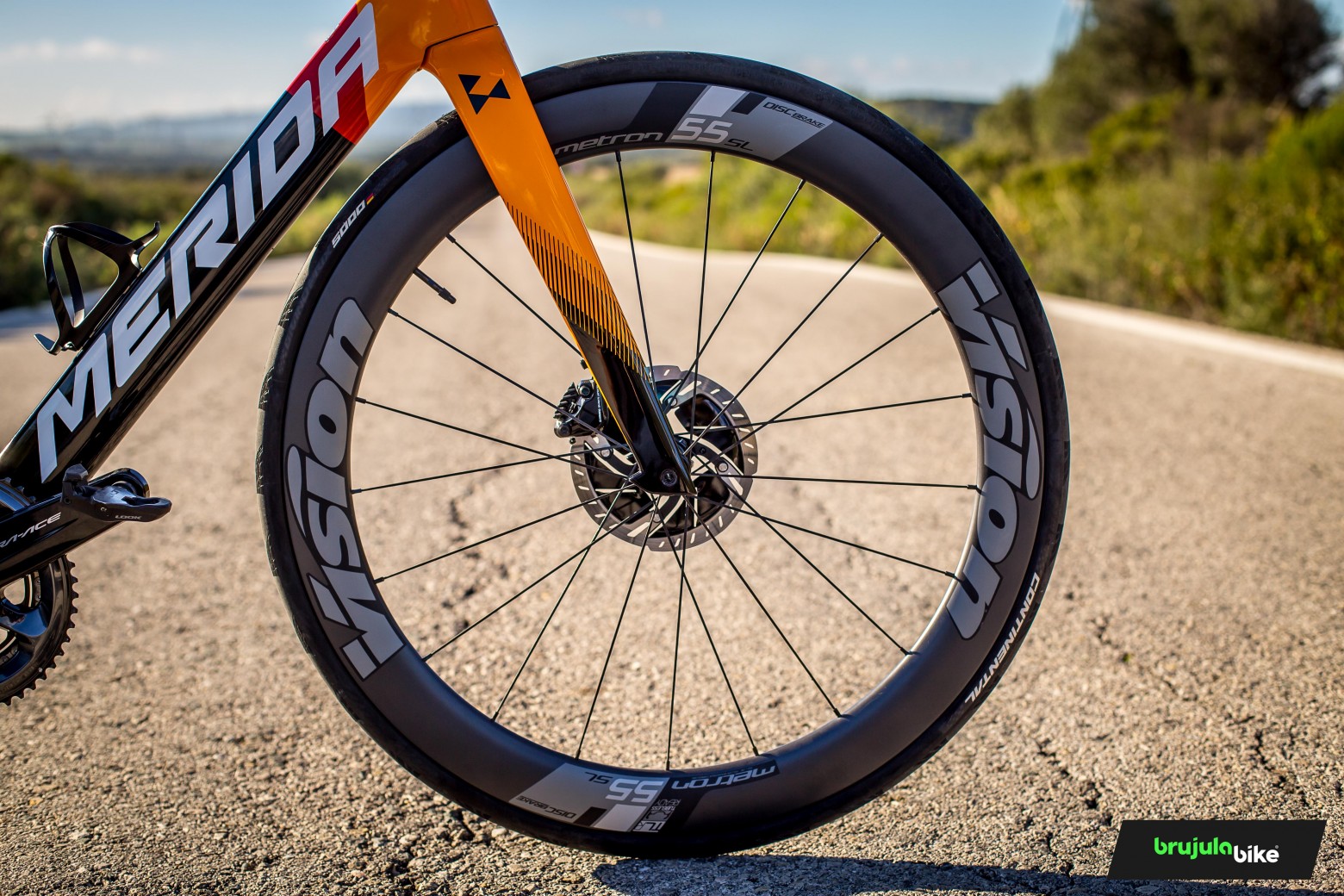 The seatstays, as is usual in this type of frame, are low and are joined to the vertical tube at mid-height in order to promote the stiffness of the rear axle, starting horizontally at the junction to improve aerodynamics. 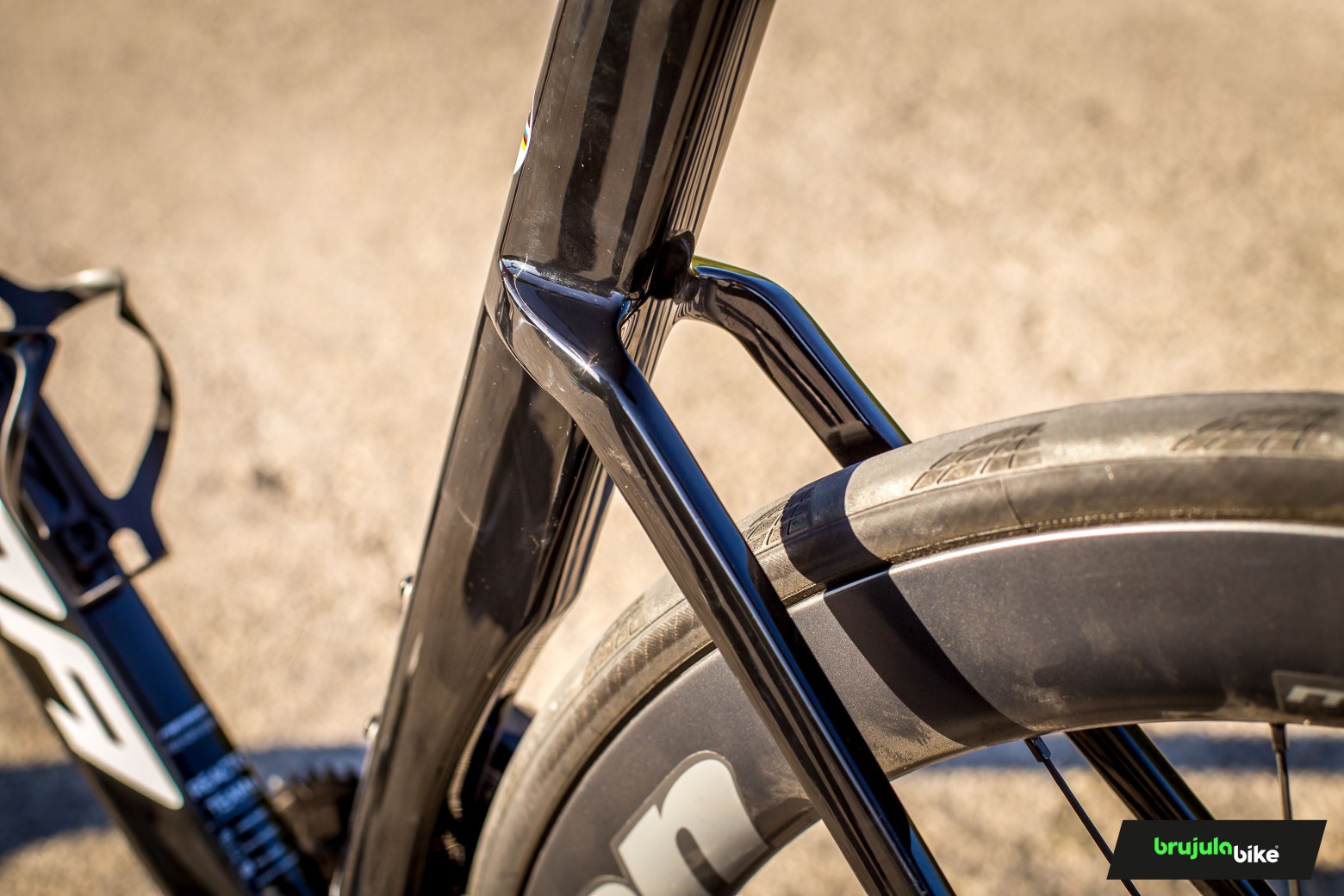 It features 12 mm thru axles on both wheels, with the special feature of the tread integrated into the fork, which makes the axle completely integrated into the fork, reducing wind resistance while giving it an elegant touch. On the rear axle there is a removable lever that not only serves to tighten and loosen the axle but can also be removed to do the same with the front axle. When removed, it has a 4 mm Allen key at the tip that we can use for other parts of the bike, such as the screws of the stem or saddle.

As expected, the geometry of the Merida Reacto is designed for competition. It is very similar to the one of its climbing sister, the Merida Scultura. In the case of our test unit it was a size M, corresponding to a size 54. 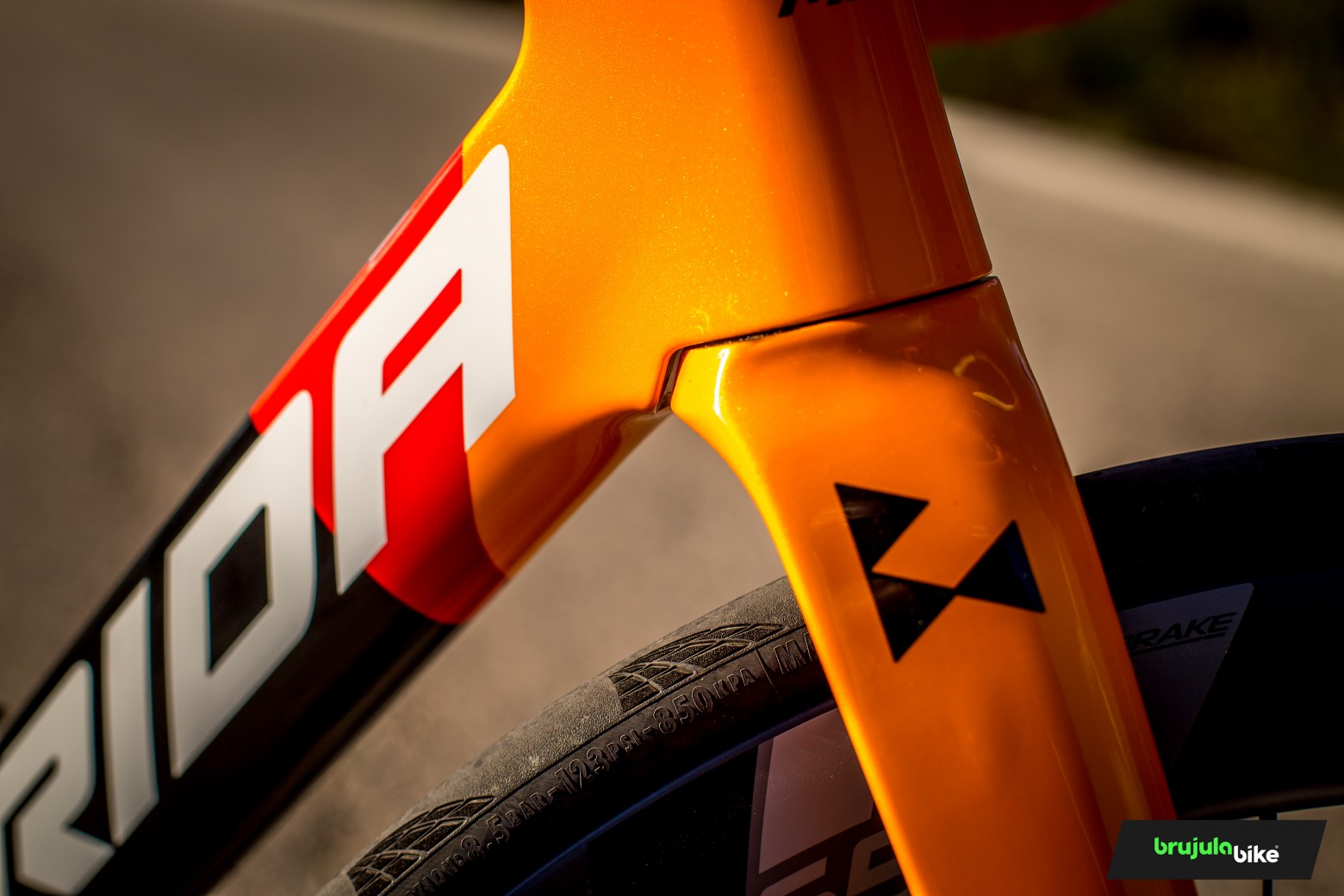 Its main feature is its headset, it is relatively short with 140 mm, partly designed to use the Vision Metron 5D set, and an angle of 73.5º which, being very vertical, adds great curving capacity.

The horizontal tube is 560 mm, leaving the riding position away to help maintain a more aerodynamic position on the bike.

It has a seat tube angle of 73.5° for good pedal force transmission.

The pods are 408 mm, slightly longer than usual but necessary to achieve sufficient wheel arch to accommodate 700X30C tyres. In addition, they provide more stability that is appreciated at high speeds. 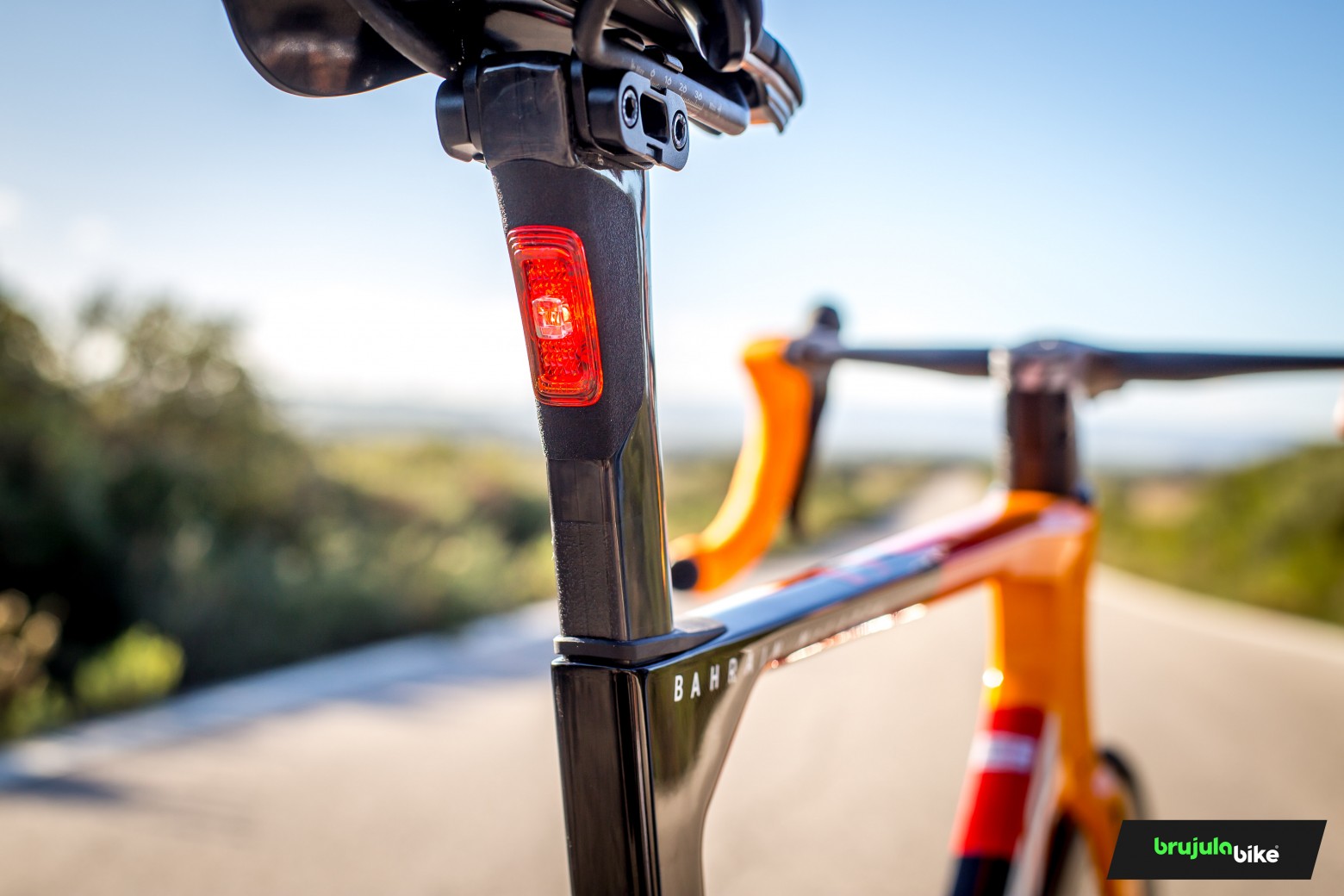 When you take the bike out of the box the frame is already impressive. The colours are the BAHRAIN-MCLAREN TEAM colours in which glossy black predominates combined with orange and red front, with the inside of the fork in blue.

The first impression when moving it is that it feels quite light for an aero frame with 55 mm wheels. To avoid any doubt, we checked its weight, giving us 7.54 kg without having the pedals on yet, but with a drum holder and light integrated into the seat post.

We started out by taking open roads with very little gradient to test their rolling abilities. The Reacto runs, at the slightest insinuation in the cranks the bicycle is launched, gaining speed easily. The overall stiffness of the set is noticed, which it is something that is valued. The position is a racing one without being excessively uncomfortable, ideal for this type of aero bike. 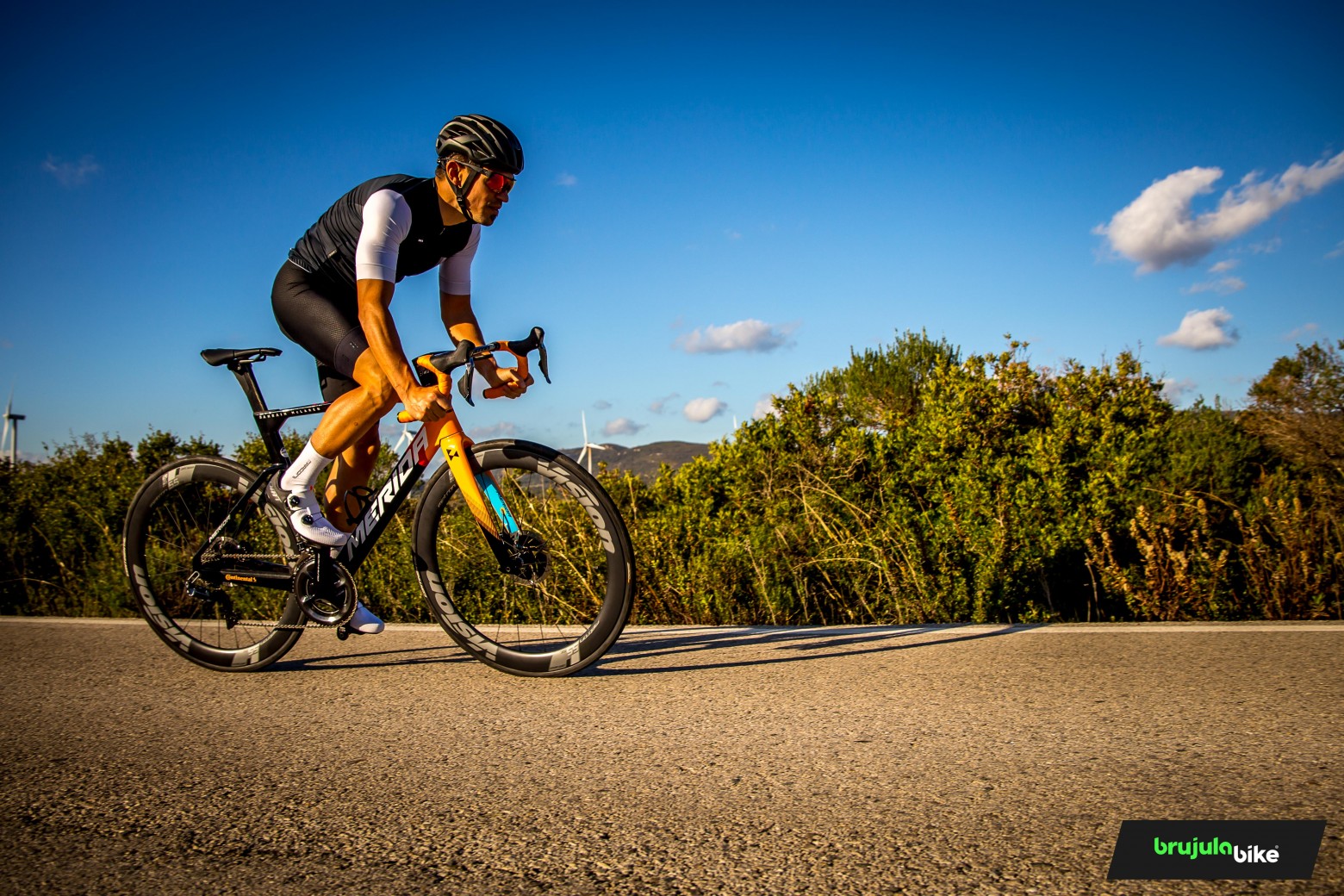 The grips on the Vision Metron 5D handlebar are balanced, allowing us to operate the levers with ease whether we are placed on top or on the bottom. It has a stiffness that matches the rest of the bike. This handlebar gives a lot of personality to the Reacto and a spectacular aesthetics. For some riders, the fact that it is a one-piece set can be an inconvenience, as it limits the range of the levers, but this is increasingly common for brands.

The work of aerodynamics is evident and it is easy for us to maintain high speeds. Its qualities as a rolling bike are present at all times. 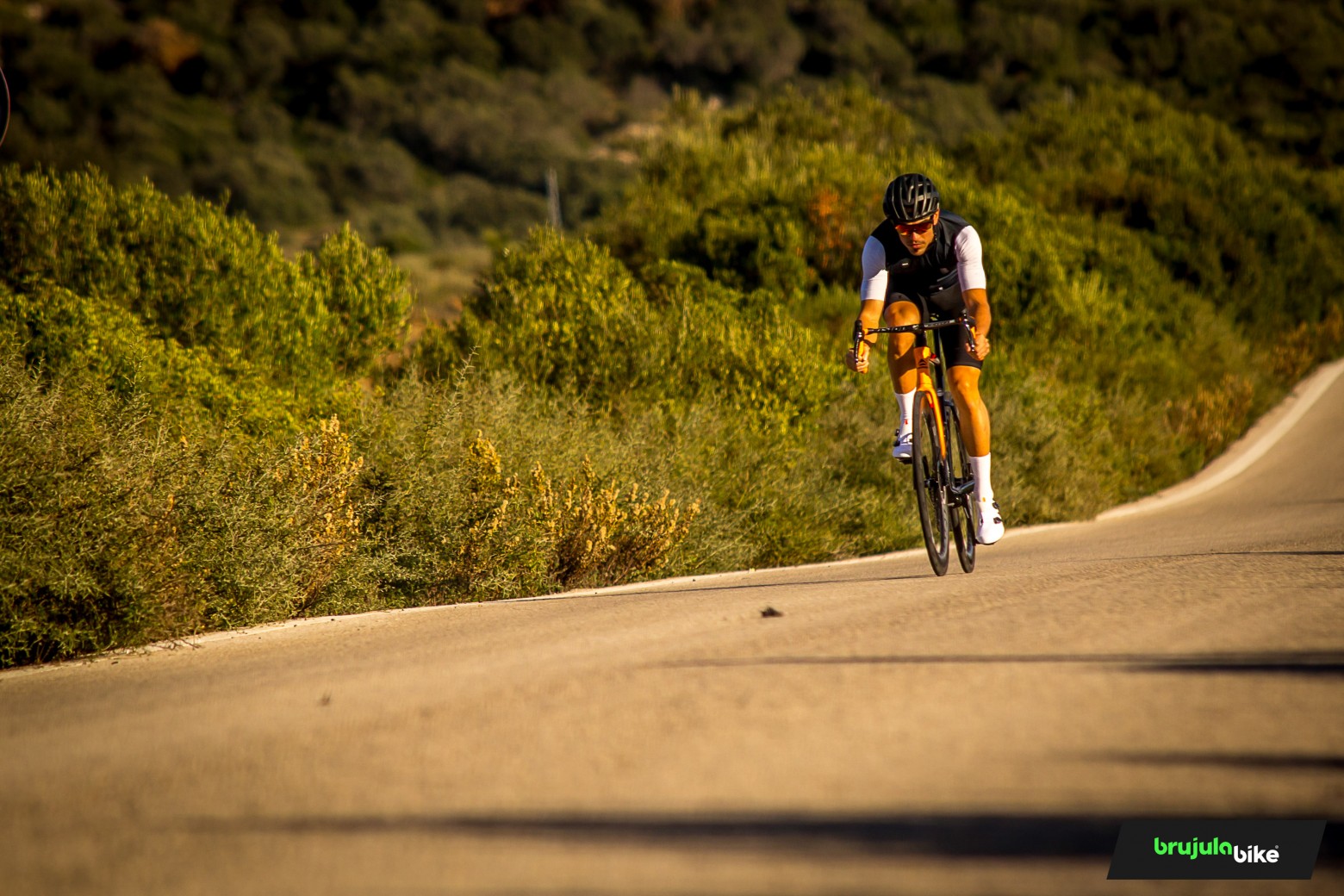 As the road narrows and we find a more imperfect asphalt is where another of its qualities comes to the surface: comfort. We are not climbing on a big frame, but the work done by Merida on this model makes it behave in a remarkable way on slightly more bumpy roads.

A special role in this comfort is played by the S-Flex seat post, which provides the Reacto with exceptional comfort. It is a carbon seatpost manufactured by Reacto that incorporates an elastomer that absorbs the vibrations transmitted from the asphalt. In spite of having been thinned, it continues to have a great volume and aerodynamic line, even so, Merida affirms that it behaves similarly to a 27.2 mm seatpost. It also has a built-in rear light that comes in handy for those days when the outings get longer. 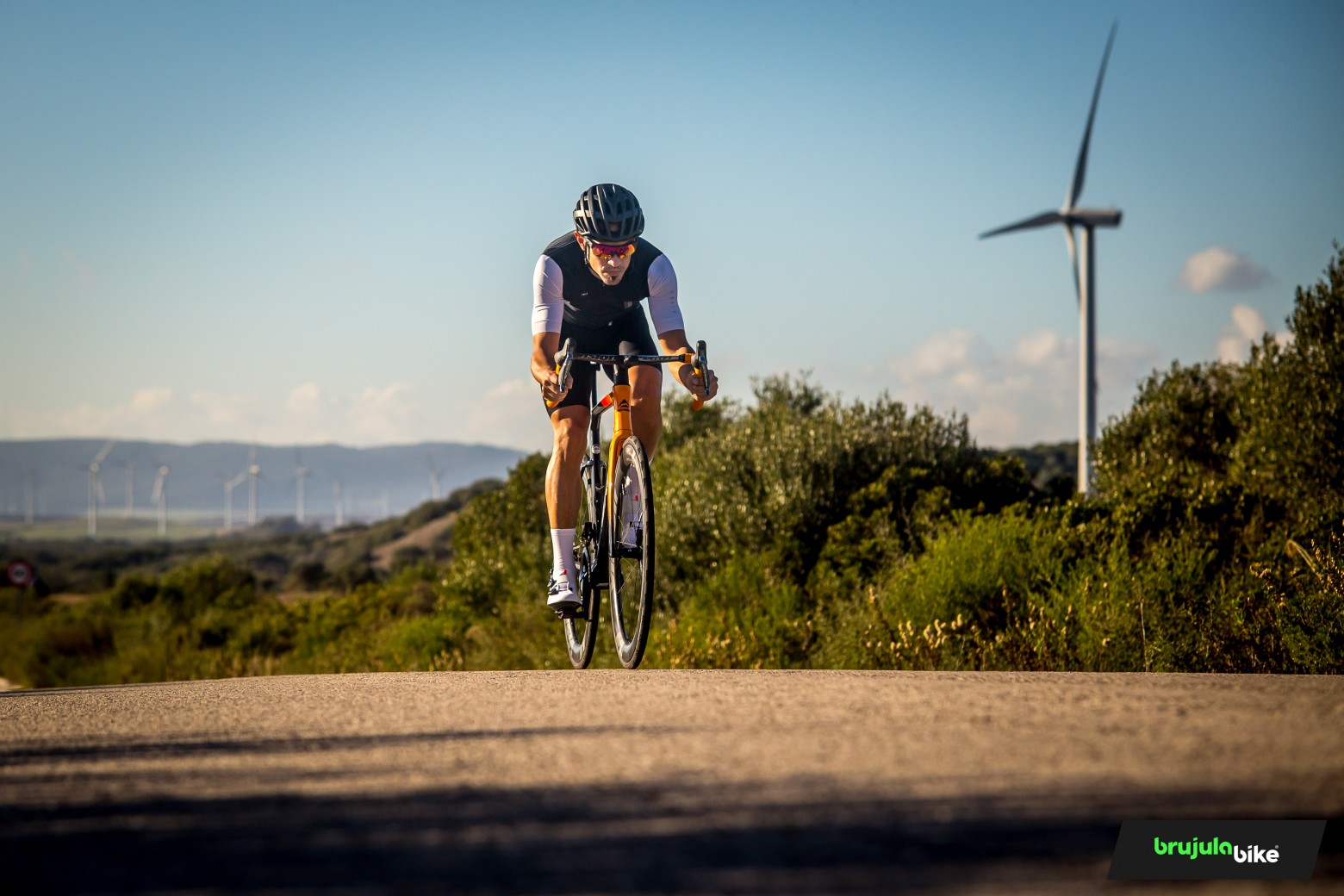 It comes equipped with Continental Grand Prix 5000 tyres of 25C width and although both the frame and the fork are prepared to accommodate tyres of up to 700x30C, at no time have we missed a wider tyre. They have a good grip, roll smoothly and absorb imperfections in the ground quite well.

Part of the Merida Reacto's behaviour is marked by the use of its Vision Metron 55 wheels, which give it a plus when it comes to maintaining high speeds, not to mention the fact that a frame and wheels match perfectly. As they are wheels with a considerable outline, they are affected by the wind when it blows strongly. In previous versions it used 65 mm wheels and the decision to reduce the outline by 10 mm has meant that the bike gains in handling and acceleration when leaving slow bends with hardly any reduction in aerodynamic efficiency. 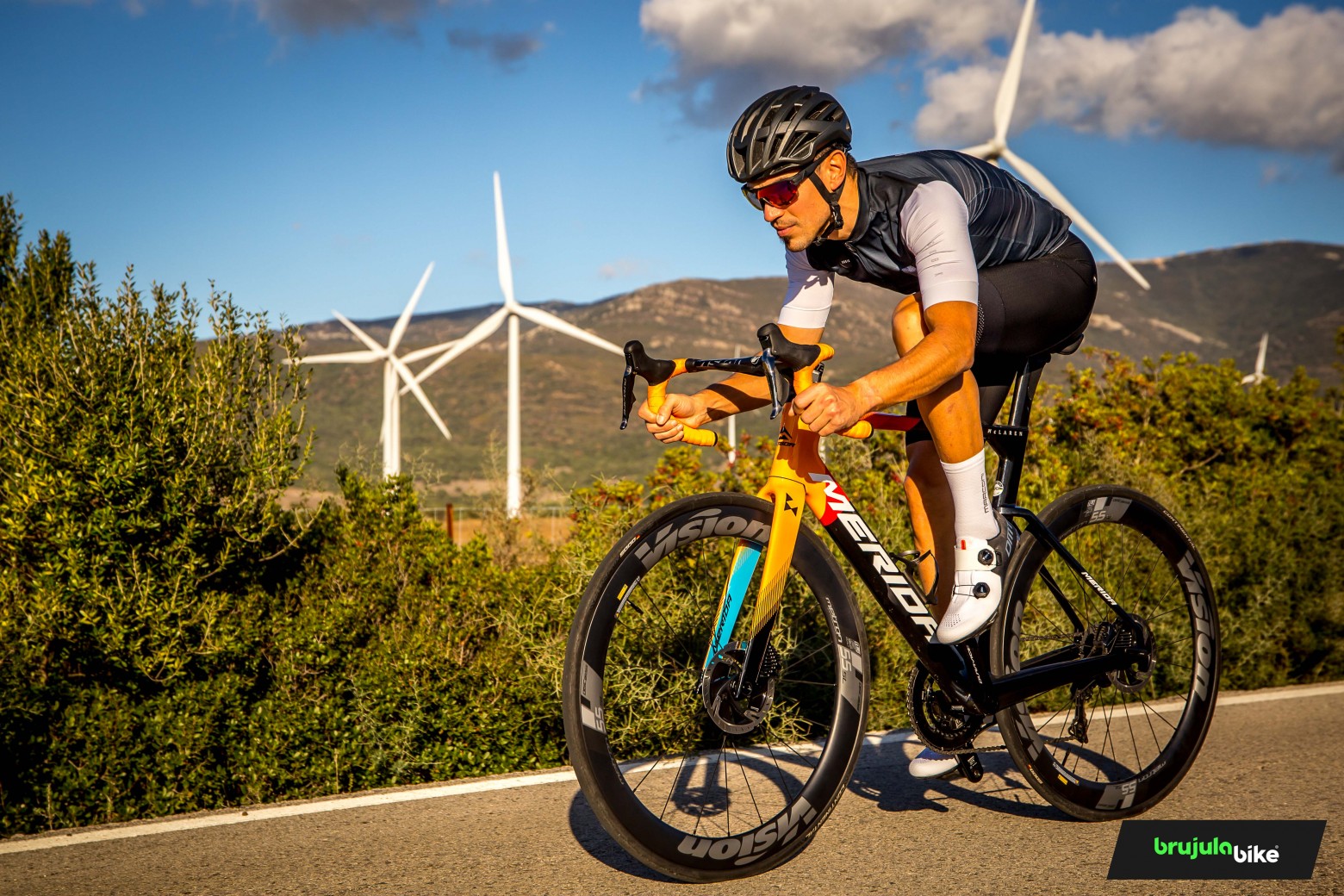 We can pass short slopes or steep climbs quickly, the good transmission of forces to the rear train means that our speed hardly drops when we face them.

On steeper climbs the bike is not as lazy as we initially thought it would be. It is clear that it is not a climbing bike like the Scultura but here it is another part where work has been done to improve. Its stiffness and the correct position in which we find ourselves when we are sitting favour a cheerful pedalling that makes it more than adequate when passing the mountain ports. The Reacto is a little heavier than a climbing bike and that can give the sensation of being a little heavy on the most demanding uphills, but it is true that this is compensated for by the benefits obtained on flat terrain or with gentler slopes. 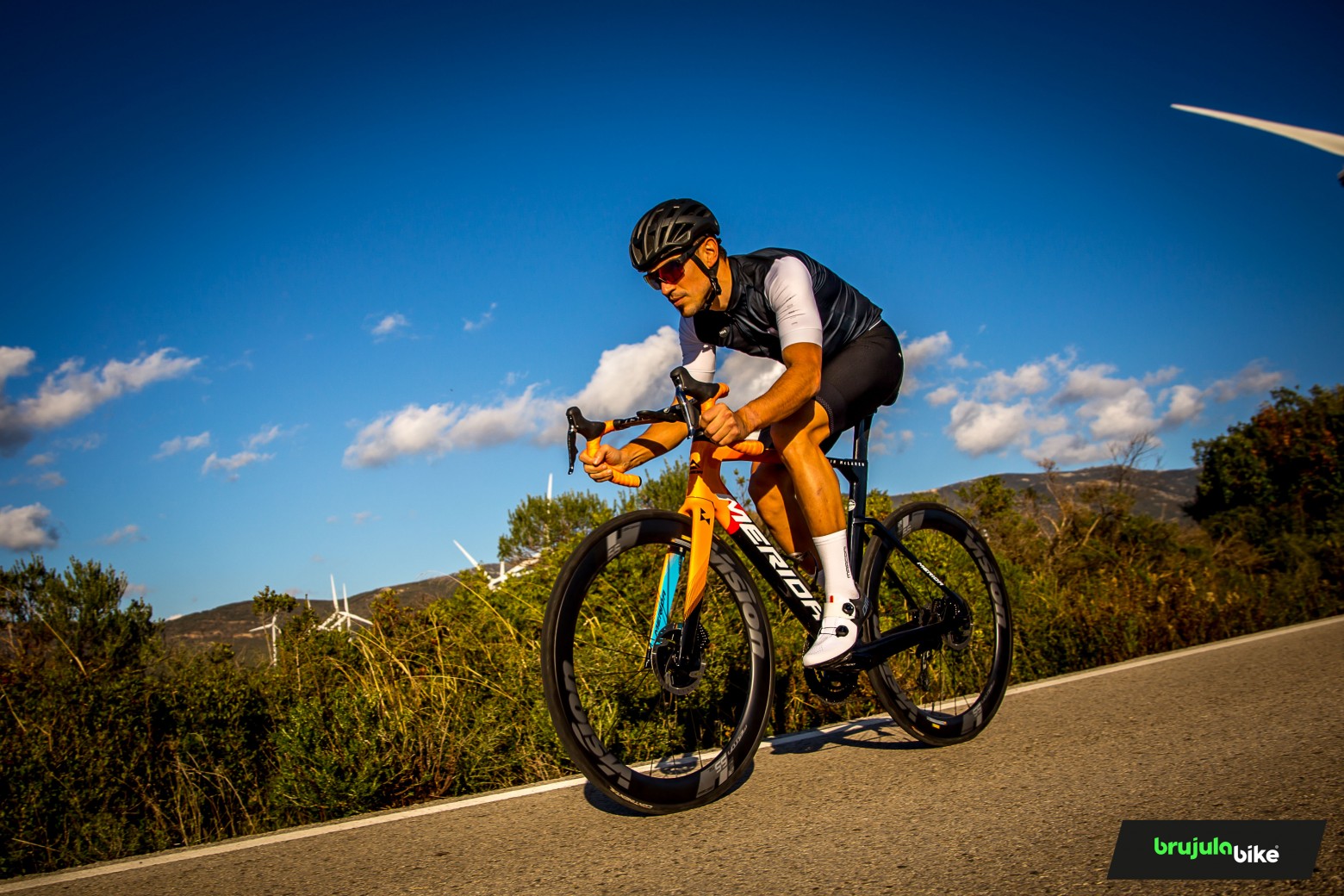 When we descend we notice that the frame is very manageable and we feel safe when we get into the curves, even in the tightest ones it behaves quite well thanks to the very vertical direction it has. As for the braking, the Shimano Dura-Ace brakes with 160 mm discs have a soft touch that remains stable at all times and when we need to apply the brakes, we can do so without fear. In our case we think that we haven't made such demanding downhills as to get all the juice out of the heat sinks installed in the calipers, but any help related to our safety is always welcome.

We were able to ride it for a few weeks and despite being an aero bike designed to go fast, the riding position and the Prologo Scratch M5 saddle allowed us to spend several hours without being uncomfortable at any time. 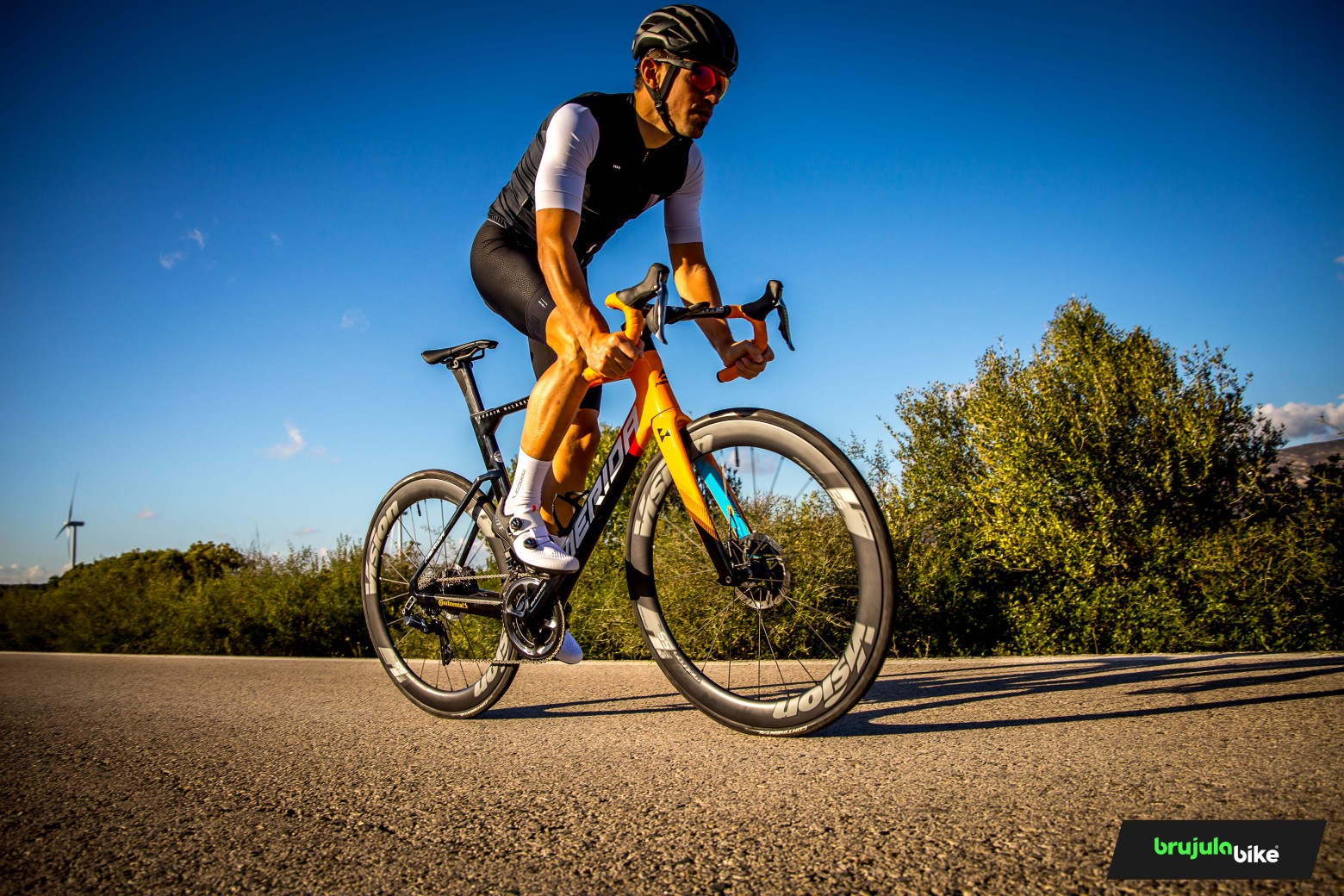 The assembly of the Merida Reacto Team-E is completed with a Shimano Dura-Ace Di2 drivetrain and brakes. The cranks, in 52-36T configuration, come with the Shimano power meter, a very accurate extra and in accordance with the value of this bike. The cassette has an 11-30 rollout, an ideal choice for almost all users, since with the 30 we will have a great help when facing the hardest slopes of the mountain passes.

The design of the levers is very ergonomic and allows them to be operated safely with just one finger without slipping. Furthermore, as the distance between the handlebar and the lever can be adjusted, it is relatively easy to put it to your liking

Conclusions on the Merida Reacto

The Merida Reacto Team-E is an aero bike with a spectacular look, with which you can ride fast and you can ride a lot on the plain and keep a good pace on terrain with little slope. In areas with steeper slopes it is less agile, partly because of those extra grams and the wheels with such a high profile, but this is compensated for by its enormous stiffness. When going down, it feels safe and is precise when connecting curves. 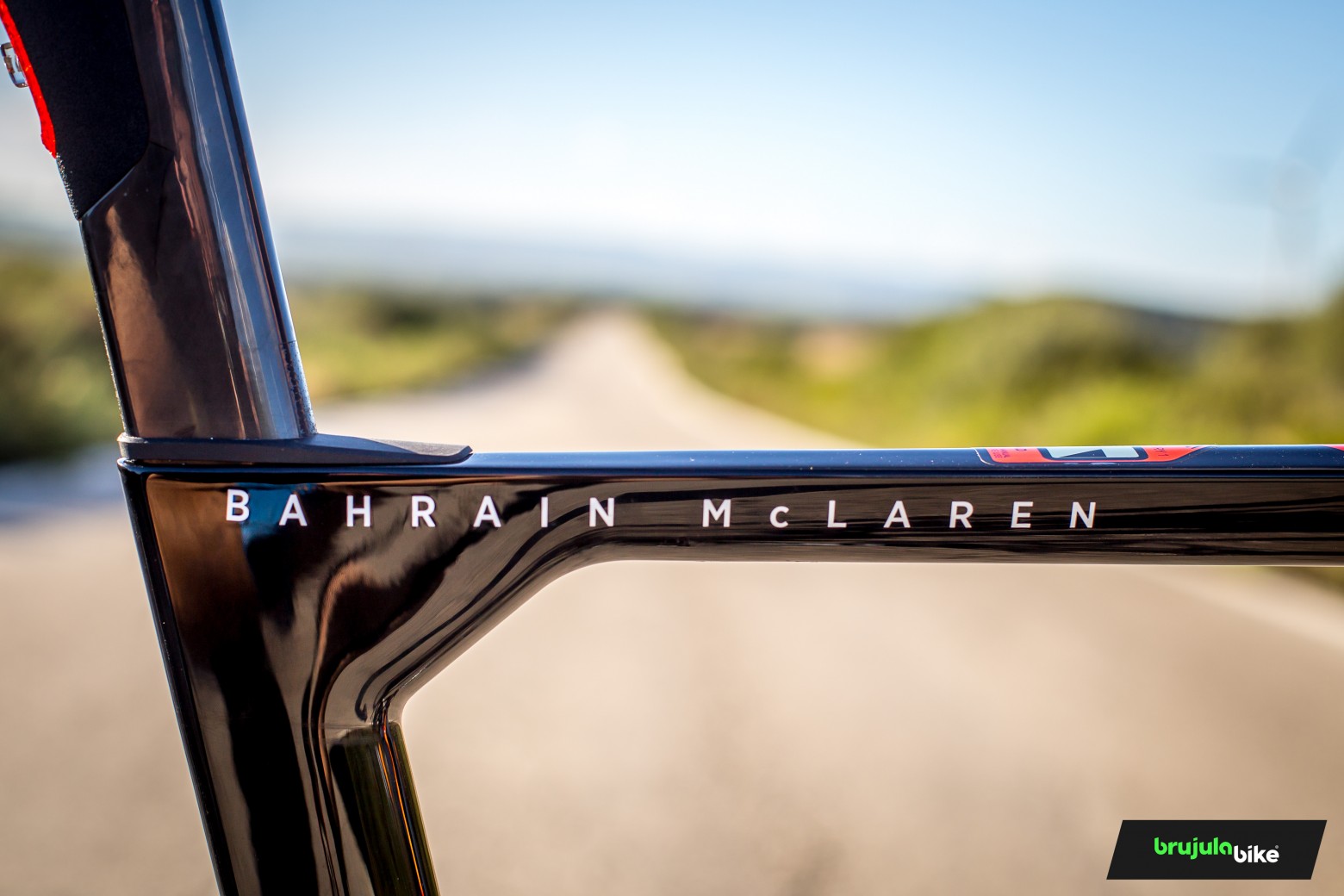 It comes equipped with very high level components, in particular its handlebar assembly with integrated stem, its wheels with a 55 outline and its S-Flex seatpost which gives it extra comfort.

This is a great choice for those who are looking for an aero bike with the best possible material and where budget is not an issue.