A few days ago a unit of the Scott Spark 900 Rc Team Issue AXS came into our hands. A very attractive mountain bike in the brand's catalogue for 2020 thanks to the combination of its carbon frame with a very striking aesthetic and the new Sram Eagle AXS electronic group, all at a very reasonable price. 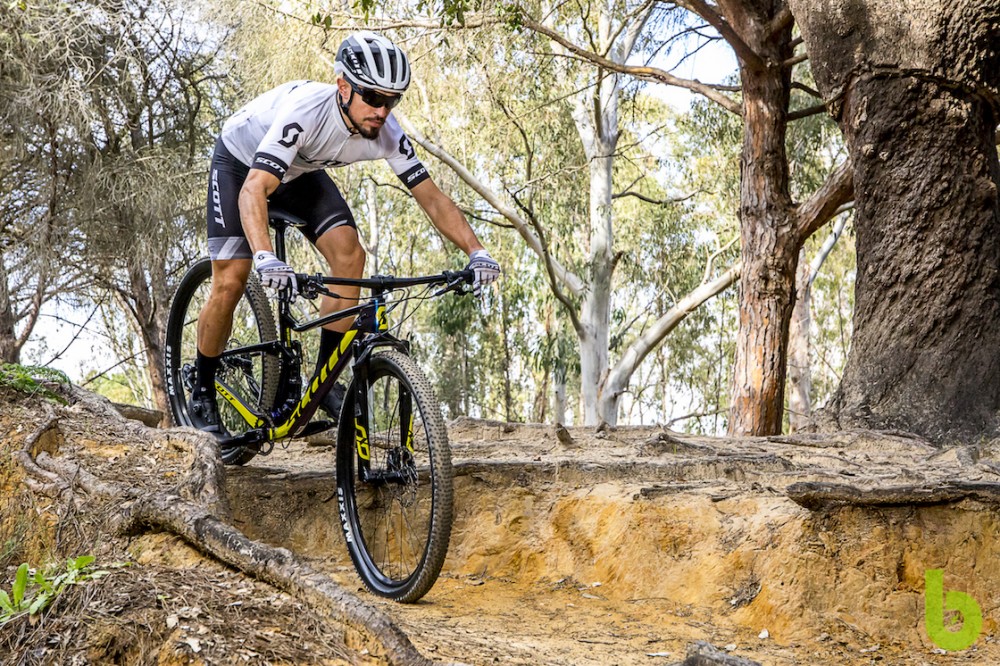 The current version of the Scott Spark is the 29" full suspension mountain bike that has won more titles in the last four years. A perfect bike for winning on the technical circuits of the World Cup as well as for the endless marathon days of a race like the Cape Epic.

Starting from the fact that this is a mountain bike with an enviable geometry for rally-marathons and capable of performing like the best on any terrain, Scott has worked hard to ensure that this Spark 900 RC Team Issue AXS has the best possible set-up without going over the 5,000 euro barrier. To do this they have chosen to combine HMF carbon in their frame, Sram X01 Eagle AXS electronic gearbox and a large number of Syncros components.

The HMF carbon is the less lightweight version of the three Scott frames made of this material (HMX-SL, HMX and HMF). But this should not be a big drawback as the difference in weight is about 300g and the properties of HMF are still superior to those offered by standard carbon fibre which is often used in the cycling industry.

To give this bike free rein on the most difficult downhills and stony terrain, the brand has designed a swingarm with a monopivot system, in which the stem and brace are joined without the need for an intermediate joint, relying on part of the suspension travel on the flexing of the carbon itself. This way they have managed to reduce a few grams in the scale and omit a critical maintenance point in the rest of the full suspension bikes in the market.

In contrast, the front triangle of the frame maintains the geometry of its predecessors and remains true to the brand's concept and ideas of XCO and XCM bikes (close to trail bikes), with a more open steering angle (68.5º) and more generous horizontal tube lengths. 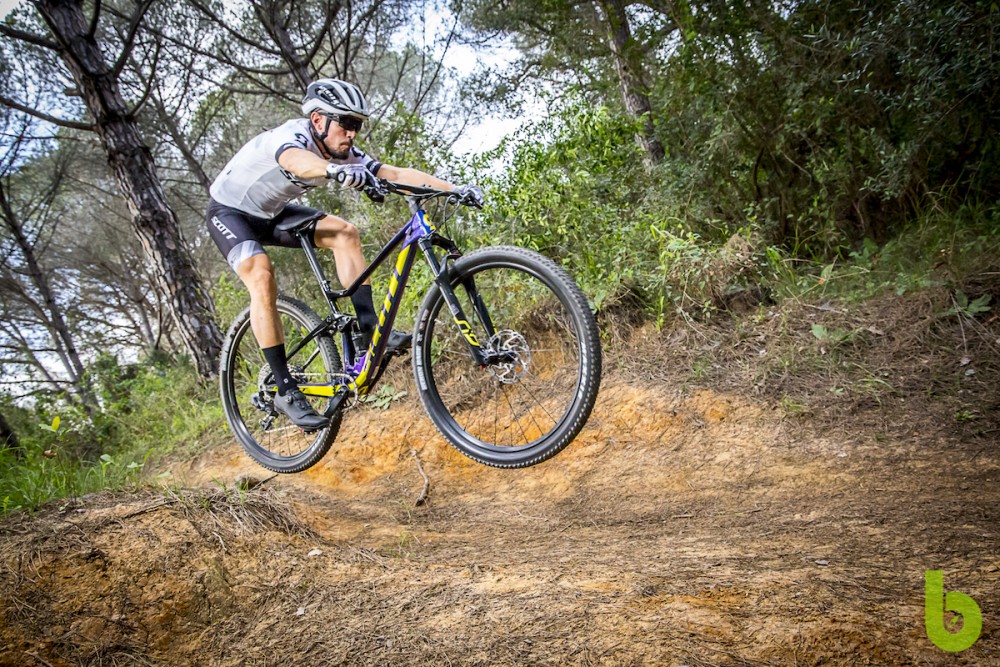 In the Spark 900 RC Team Issue AXS the front triangle and the swingarm come into harmony through the use of the Fox Nude Evol shock absorber, positioned vertically and anchored near the bottom bracket area by the new trunnion anchoring system, which gives greater rigidity to the system and the link between swingarm and frame. This placement gives the Scott a greater stability and agility with respect to the way it was placed by its predecessor (semi-horizontal position), since it manages to lower the center of gravity and the weight is much more centered. 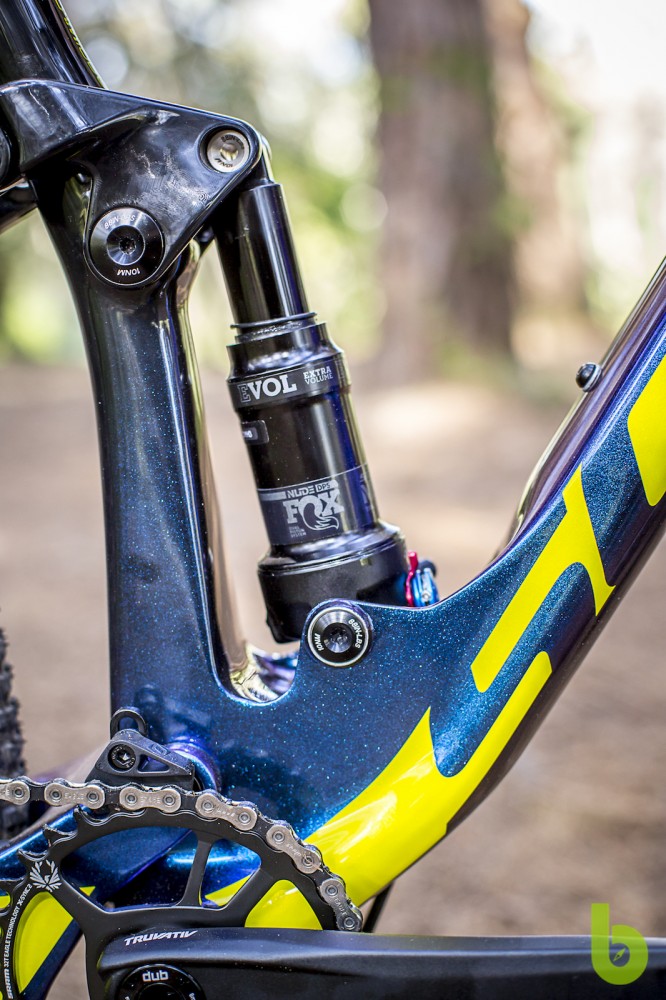 The front end of this Spark Team Issue is equipped with a Rockshox SID Select+ RL3 Air, a fork that behaves smoothly and progressively on the most demanding terrain. The RockShox SID Select+ RL3 Air, is equipped with a specific locking cartridge that allows it to have the same locking positions as the FOX rear shock, all this controlled by the Twinloc control with 3 driving modes thanks to its Nude technology: open, intermediate position (70 mm of travel) and full lockout.

Thanks to the combination of options offered by this suspension, the Spark adapts perfectly to any situation we may encounter on our mountain bike outings.

The operation of the suspension is firmer at the beginning of its travel, but it becomes smoother as it increases and more absorbent to all kinds of irregularities. Add to this the fact that this Spark is fitted with 2.35" Maxxis Recon Race tyres along with Shimano XT brakes and you can be sure of a lot of fun on any downhill run.

The tyres that we can see in this Scott Spark (Maxxis Recon Race 2.35) have a bigger ball than what we are used to see in XCO and XCM bikes, although it may seem strange, these tyres have a lower contact with the ground in its vertical position so we don't add any ballast, on the contrary, we add security, because, in spite of having a low blocking, they offer a more than remarkable grip in all kind of terrains.

With regard to the Shimano XT Deore brakes, we have little to say, guarantee of reliability and good braking, ideal for the assembly that accompanies this bike.

In addition to the proper functioning of the suspension system, the other key to the Spark lies in its weight distribution. When facing complicated or fast curves, the bike is easy to handle and remains stable giving us safety and reliability. 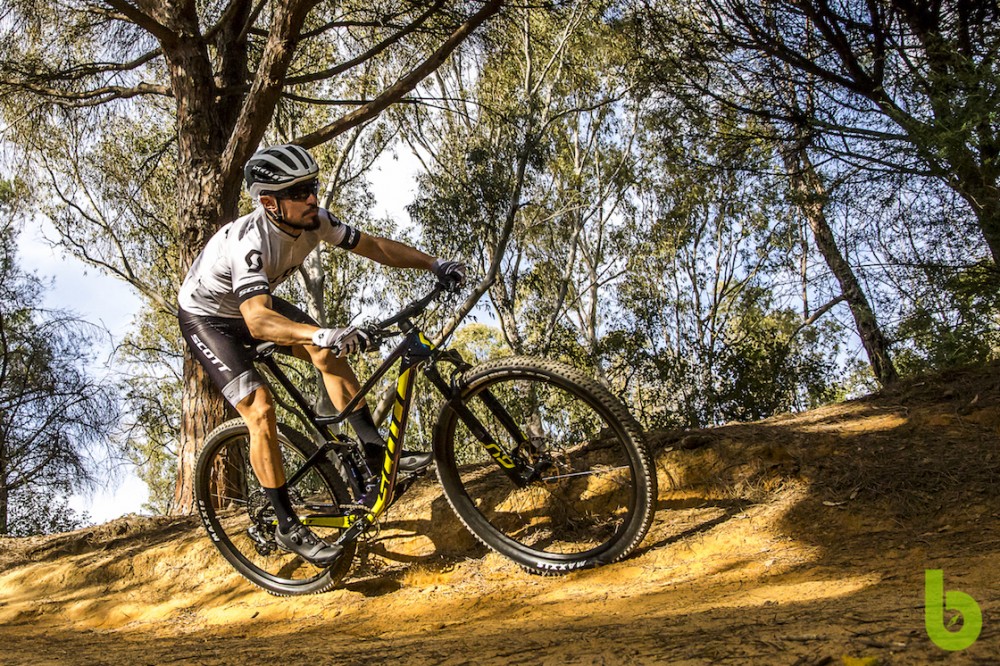 The Sram X01 Eagle AXS group, the latest in technology from the American brand, is in charge of the gearbox, and we can say that it is the reason for raising the level of riding to a higher level, as well as giving an extra point to the aesthetics of the bike by eliminating some of the wiring.

According to SRAM, the removable battery in the Eagle AXS has a 20-hour operating range, and the truth is that after 180 km of our test there was still enough battery for as many kilometers. The shift button includes a "button" type battery that lasts about 2 years. About its operation, we can only say that it is a change as smooth and precise as you can imagine. It really is a step above its competitors.

In addition, we have checked how well the anti-shock system of this AXS works. When it receives an impact, for example a stone, the gearbox absorbs the shock and protects the pin, ensuring that it maintains the desired position without changing the sprocket.

The gear assembly of this Spark is completed by the Stylo aluminum crankset with a 32-tooth chainring and the Sram Eagle GX 10-50 cassette, a combination that works very smoothly and perfectly but adds a few extra grams to the set. The 32-tooth crankset, together with the 50-tooth sprocket set in the cassette, has proved to be a very successful combination for beginners and intermediate riders who do not want to suffer on any climb.

The rest of the components of the Spark Team Issue are handled by Syncros. The wheels are the Silverton 2.0 model, its operation is correct but it would be one of the first components that we would choose to change if we wanted to improve our Spark. We found the Syncros Duncan 1.5 aluminium seatpost and the Belcarra 1.5 saddle, top of the range with titanium rails, quite comfortable during the test.

Finally, the controls of this bike are located on a Syncros Fraser 1.0 carbon handlebar at 740 mm, which gives us quite a lot of comfort due to the degree of absorption of the carbon, although we would like it to have a little more rigidity. The 70 mm long XR1.5 Syncross stem is made of aluminium, as is the seat post.

To look imposing, this Scott Spark 900 Rc Team Issue AXS has been decorated with a litmusic paint that changes its tone and brightness depending on the light it receives. A very original detail that captures the attention of anyone who passes by.

In general, we think the Scott Spark 900 Rc Team Issue AXS is a good choice if you are looking for a top-of-the-range mountain bike with the SRAM AXS and a secure mounting. To get a price of 4,999 euros on this bike we had to sacrifice a few grams of weight, but we think that the assembly is very well justified and has achieved a balance between performance and weight almost unbeatable.