We review the best gravel groupsets of the moment

The fact that the gravel discipline is more than just a trend is evidenced by the commitment of the major component brands that have created groupsets for gravel designed to deal with the peculiarities of this speciality. You can find here the best options on the market. 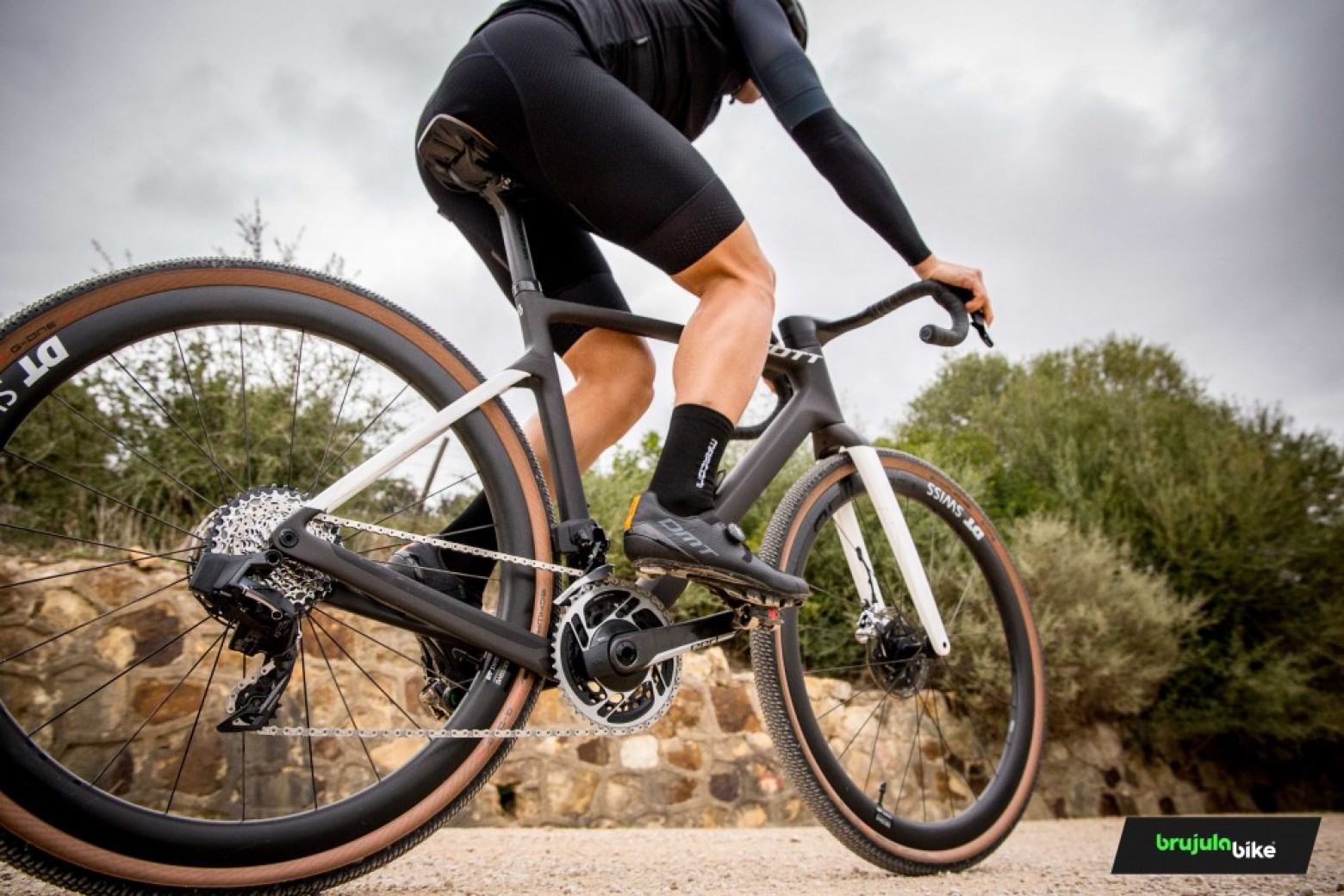 Gravel groupsets: ready for any challenge

If there is one thing that characterises gravel, it is versatility. A modality that ranges from long stretches of asphalt to real mountain terrain. Simplicity and lightness are also characteristic of bikes that have to cope with long distances but with the necessary robustness to withstand the rigours of riding on unpaved terrain.

These qualities are not strange to bike drivetrains and the brands take advantage of technologies from their road groupsets as well as those designed for mountain bikes.

In 2019 it introduced its groupset collection specifically designed for use on gravel bikes. Until now, for the equipment of this type of bike, conventional road groupsets were used, which on the one hand meant having to use a double crankset and secondly, the limitation of road chainrings when it came to tackling routes with large unevenness off the asphalt. 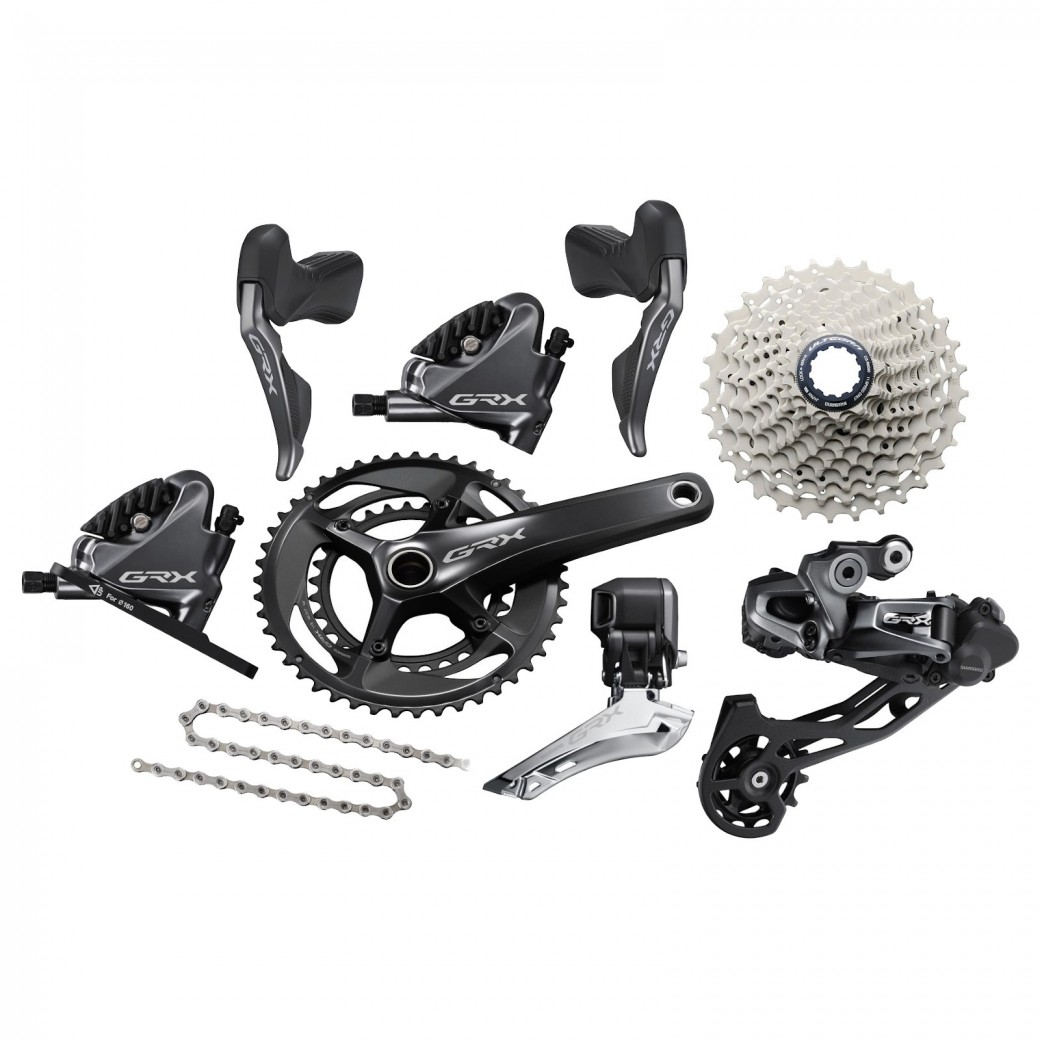 The GRX series is actually 3 groupsets: The 400 series, with 10v mechanical drivetrain which would be at a level of quality equivalent to the road Tiagra; the 600 series, also with mechanical drivetrain but now with 11 sprockets on the cassette and single chainring option; and finally the 800 series, placed in the range at the level of the Shimano Ultegra which adds to the features of the 400 the availability of the Di2 electronic drivetrain.

Obviously, speaking of the best gravel groupsets, we have chosen the GRX Di2 option with which we can enjoy the totally precise operation to which we are accustomed with the electronic groupsets of the Japanese firm. 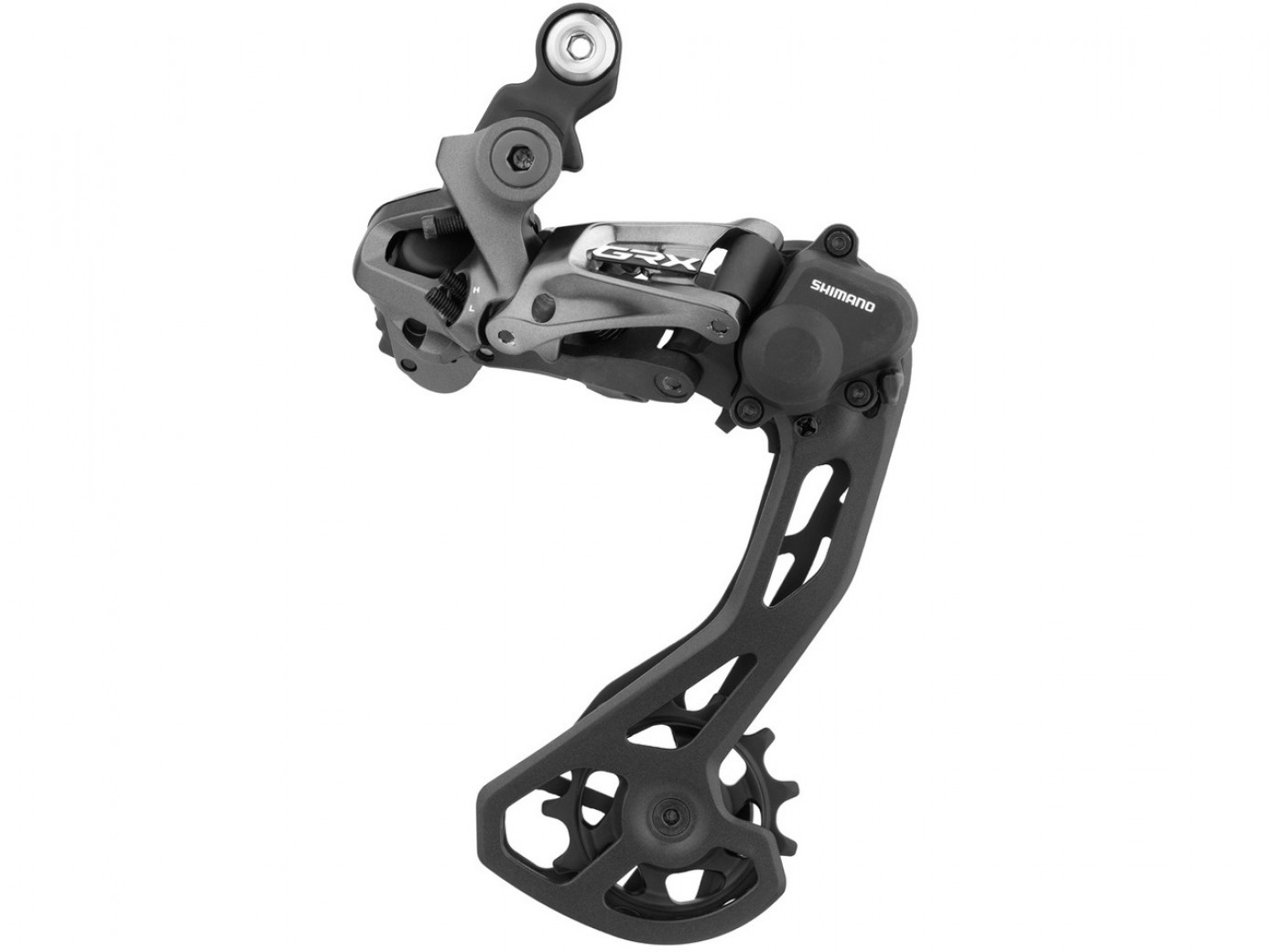 The rear derailleur is derived from Shimano's first approach to gravel last season with the Ultegra RX, a rear derailleur that incorporated the damping system of its MTB groupsets that prevented chain jolts over bumps.

This technology, called Shadow+, consists of a more powerful derailleur pulley box tension spring and a friction system at the pivot point that minimises movement. This technology is also incorporated in the GRX Di2 rear derailleur, to which is added a rear derailleur profile that places it as protected as possible under the cassette. 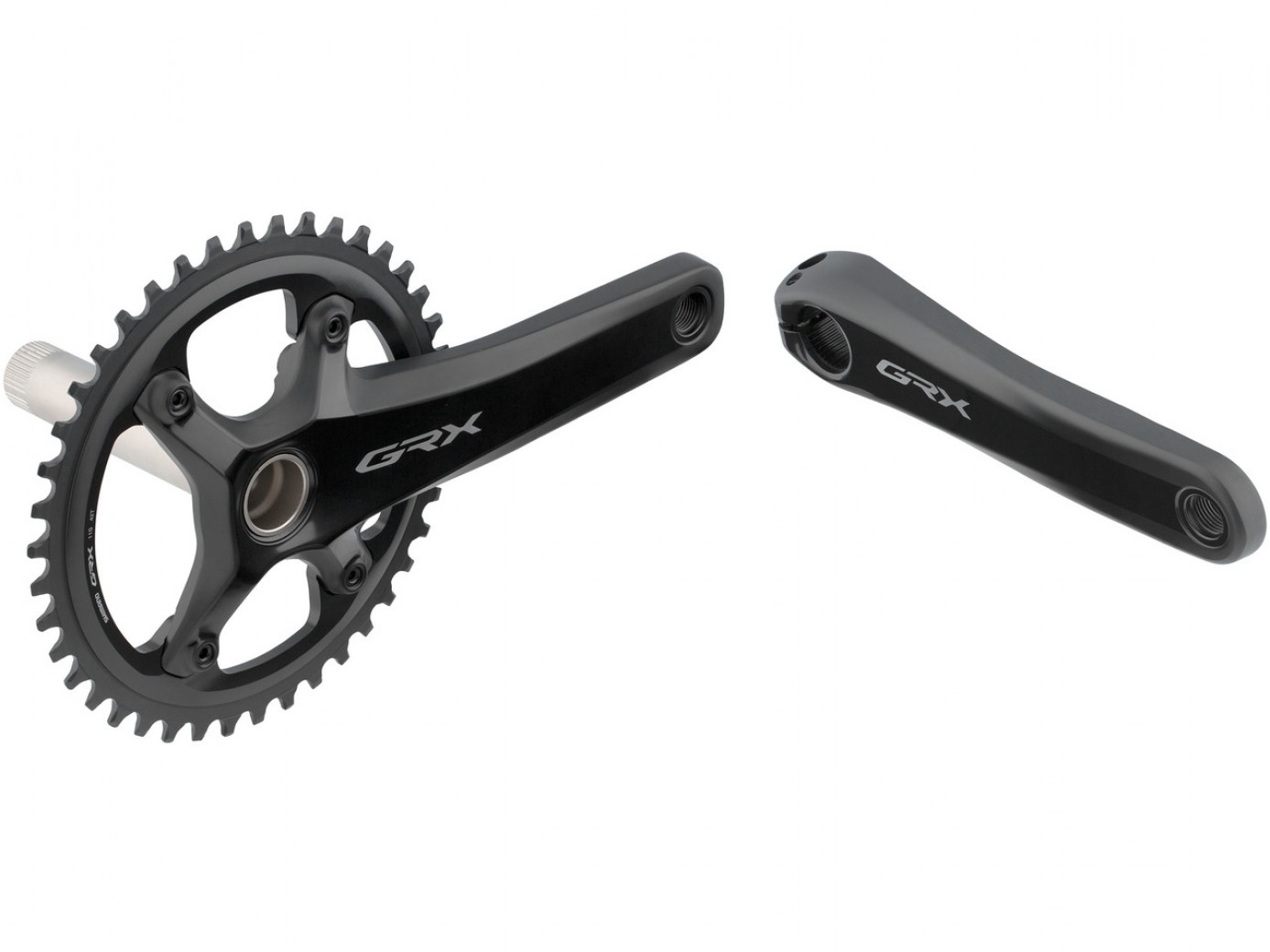 The specific cassette for this groupset has 11-34 teeth, although, as the rear derailleur accepts up to a 42-tooth sprocket, Shimano gives us the option of using the one corresponding to the XT 11-42 groupset, which would give us sufficiently soft gearing for any situation we may encounter.

To finish the analysis of this group, it is worth mentioning that the brake calipers are only available for Flat Mount system and we can choose between the usual 140 or 160 mm disc sizes.

The latest major renovation of the American company's road groupsets at the beginning of 2019 confirmed SRAM's dedication to fully integrated cycling. It was blindly committed to electronics in its Red and Force road groupsets with AXS technology and designed them both for exclusive use on asphalt and for gravel with their 12 sprockets, single chainring options, integration with the brand's dropper seatpost and with the rear derailleur chain stabilisation system. 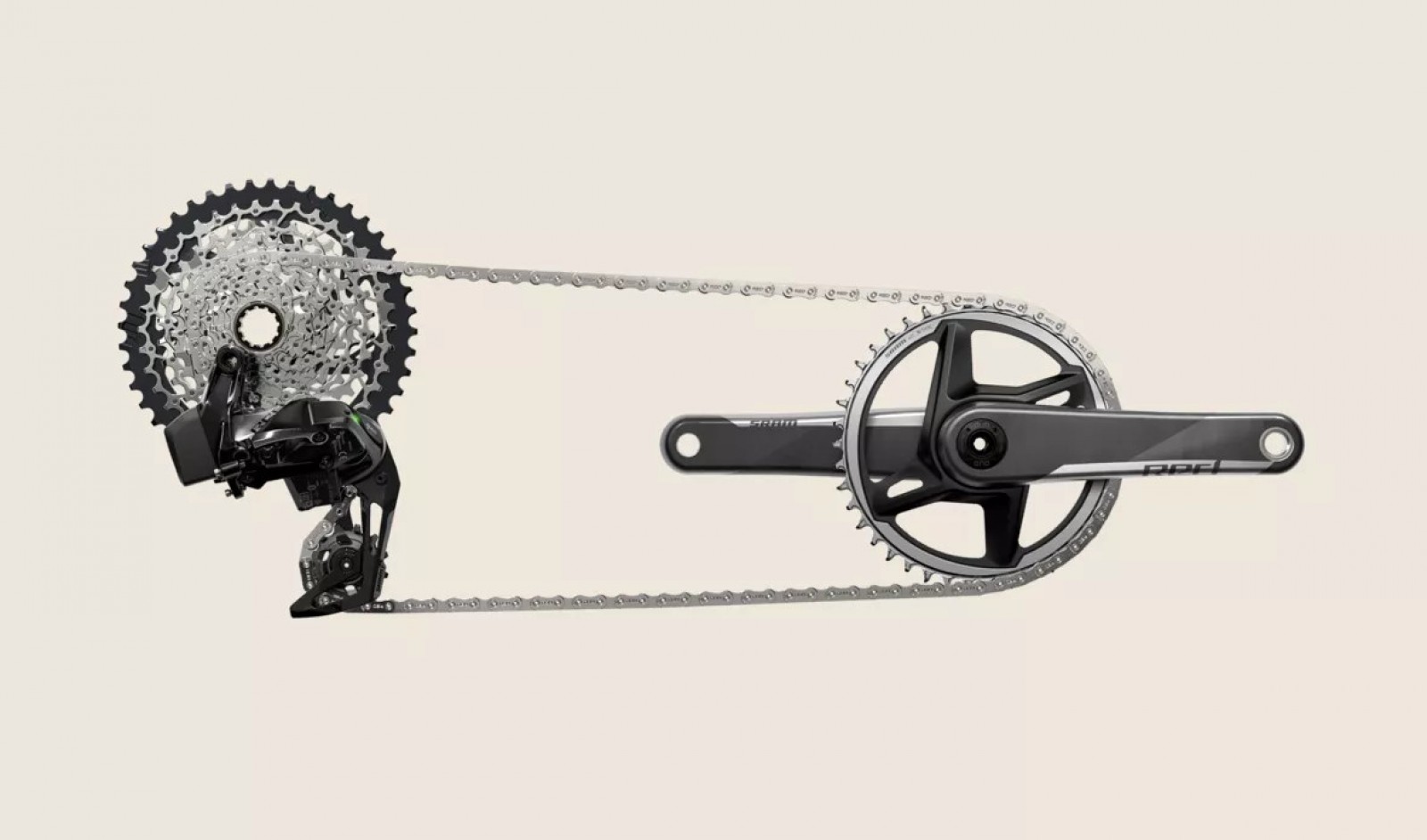 A few months ago, SRAM went a step further in the gravel side of these groupsets by adding the XPLR variant, which allows for a wider range of gear ratios and the addition of other components such as a suspension fork. But let's take it one step at a time.

SRAM has made a firm commitment to electronics in its groupsets, with up to three levels of quality: Red, Force and Rival eTap AXS. All of them share the same technologies and the 12 sprockets of their cassette.

However, SRAM still has the 11-speed Force and Rival mechanical groupsets and the Apex as an entry-level groupset with 10 sprockets in its catalogue. Although these are not specific groupsets for gravel, the corresponding single chainring versions are designed for off-road use.

Focusing on the Red eTap AXS, we start with the rear derailleur. Apart from the battery for its operation, being a wirelessly operated groupset, its main feature is the Orbit chain stabilisation system. Unlike its competitors that use a friction system, the Orbit is a hydraulic cartridge with a valve that allows smooth, slow movements while slowing down the fast ones caused by impacts. This way the shifting operation is not affected while the chain stays in place when riding over bumpy terrain. 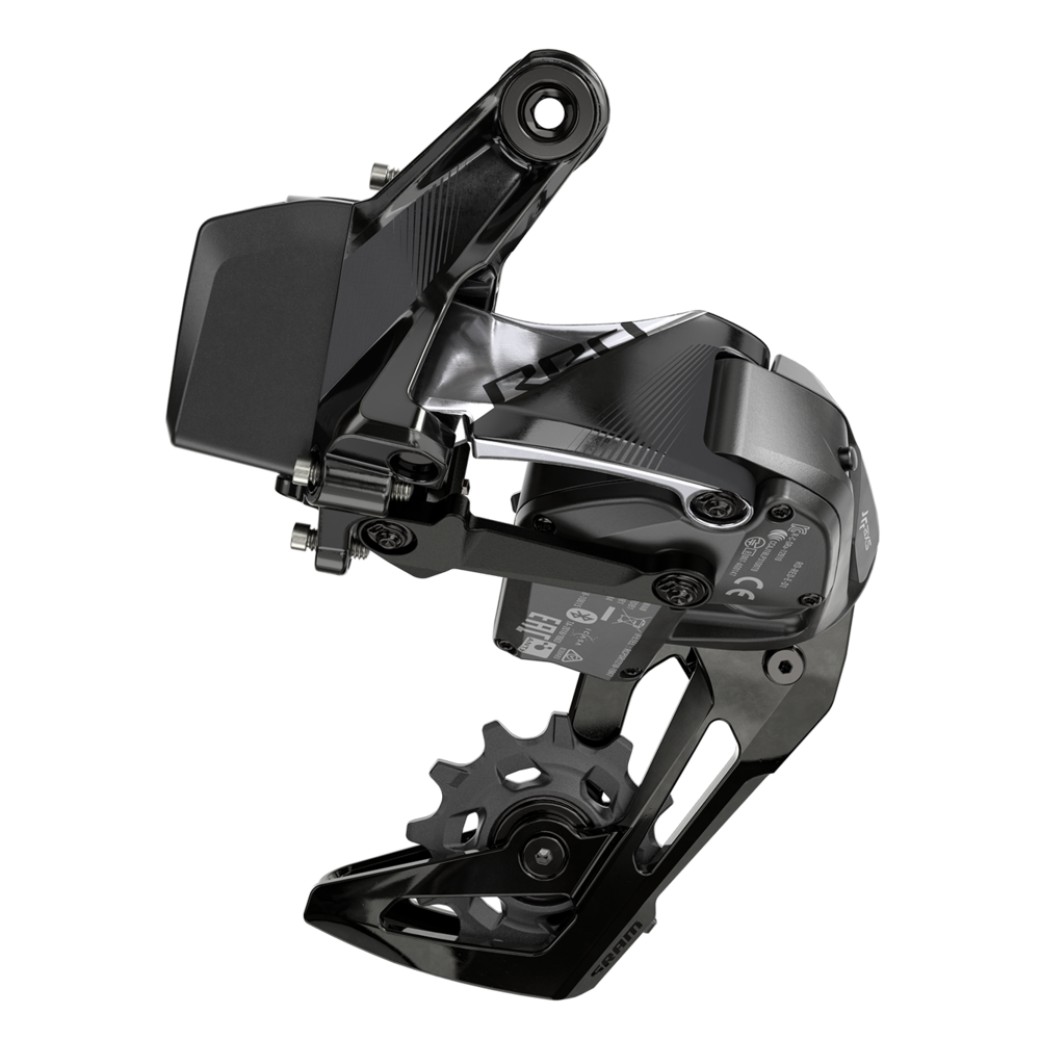 The front derailleur, if used, has the characteristic Yaw movement, in which the plates not only move laterally but also rotate slightly to match the chainline to avoid rubbing in any position.

As with Shimano, the brake calipers are only available for Flat Mount and the discs are available in 140 and 160 mm.

On the handlebars, both levers have a shift button, even if we use a single chainring configuration, as on the eTap AXS the right knob is used to shift down and the left knob to shift up, while pressing both at the same time raises or lowers the chainring if used.
The addition of the XPLR variant has meant the arrival of a new 10-44 cassette that adds much more versatility for purely gravel use. Until then you had to make do with a 10-33 combination. 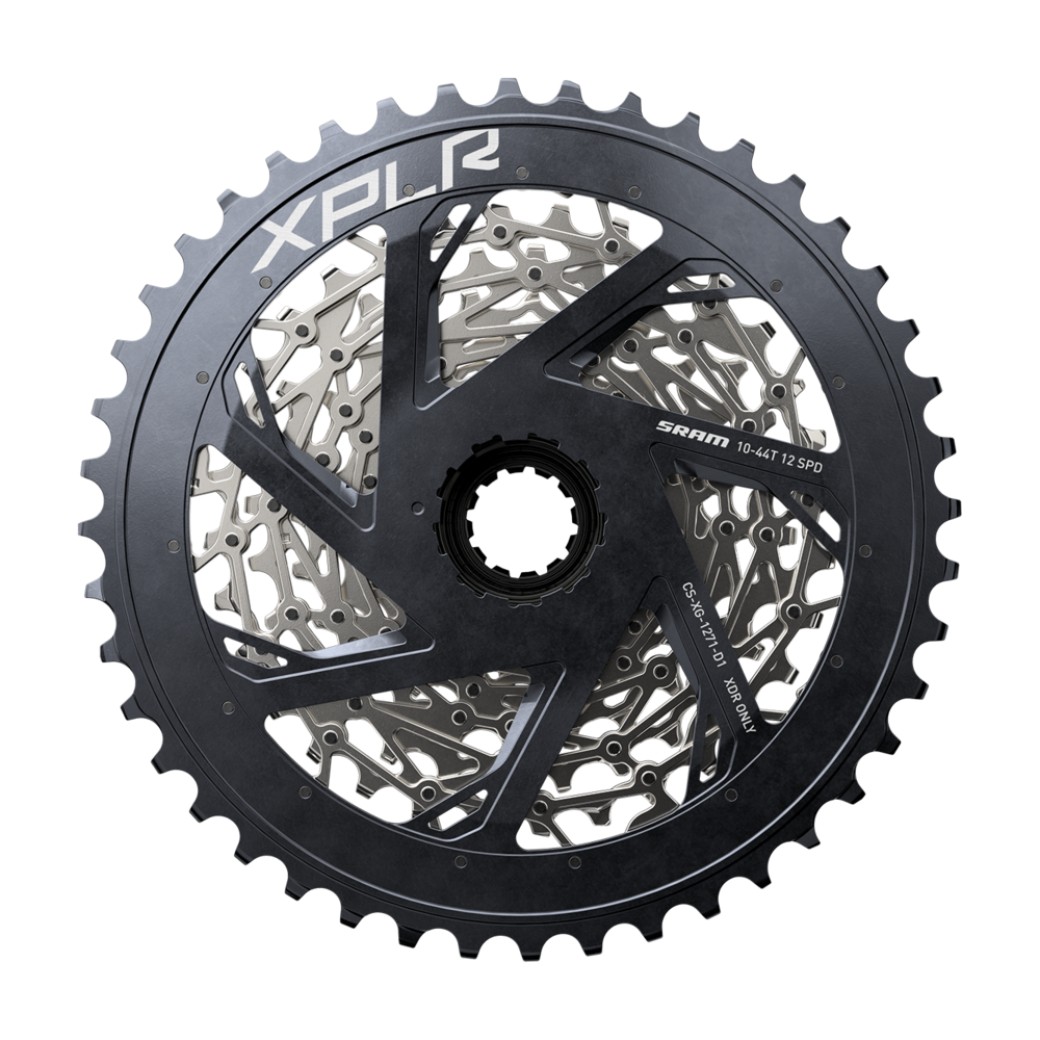 The Italian firm goes one step further than its competitors in its specific groupset for gravel by opting for a single chainring configuration. To avoid the main problem, excessive jumps between sprockets if we want to maintain a wide enough range to cope with any situation, they have not hesitated to create a 13-speed groupset.

Having a sole single chainring configuration has allowed Campagnolo to optimise the movement of the rear derailleur to work with these 13 sprockets. Incidentally, a rear derailleur that in this case only exists in the mechanical version, with the Italian firm's EPS technology remaining only in the road segment.

Of course, it has a stabilisation system in the pulley box that prevents the chain from shaking and keeps it in place. 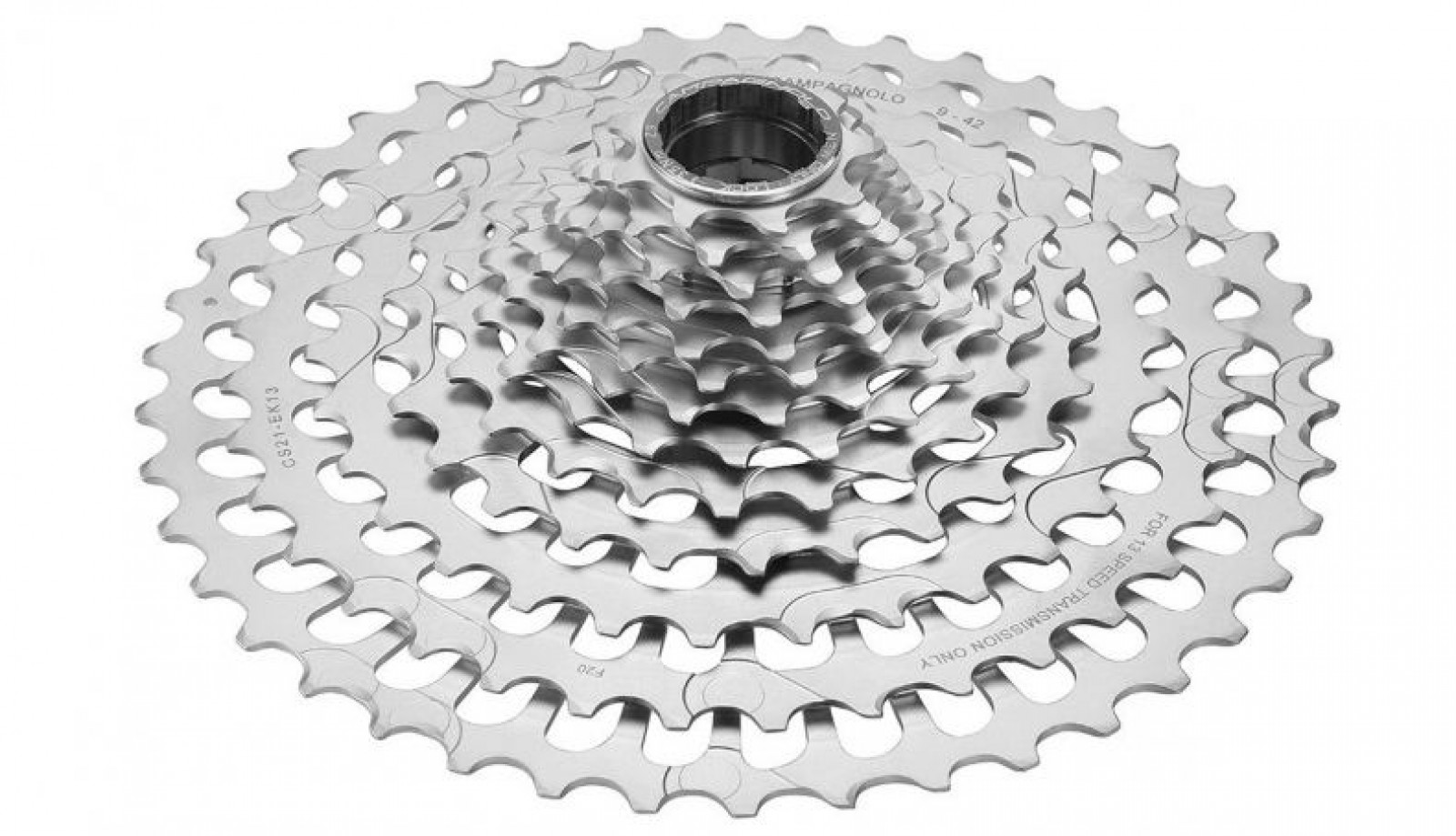 The 13-sprocket cassette is available in three versions, 9-36, 9-42 and 10-44. All of them have the particularity of maintaining minimum jumps of 1 tooth in the lower half of the cassette, just where most noticeable gear changes occur. The use of 9 and 10-tooth sprockets has forced the Italian firm to develop a new core which they have called N3W and which maintains compatibility with 11 and 12 sprocket cassettes.

The single chainring crankset, exquisitely constructed in UD carbon, is available in 38, 40, 42 and 44 teeth. 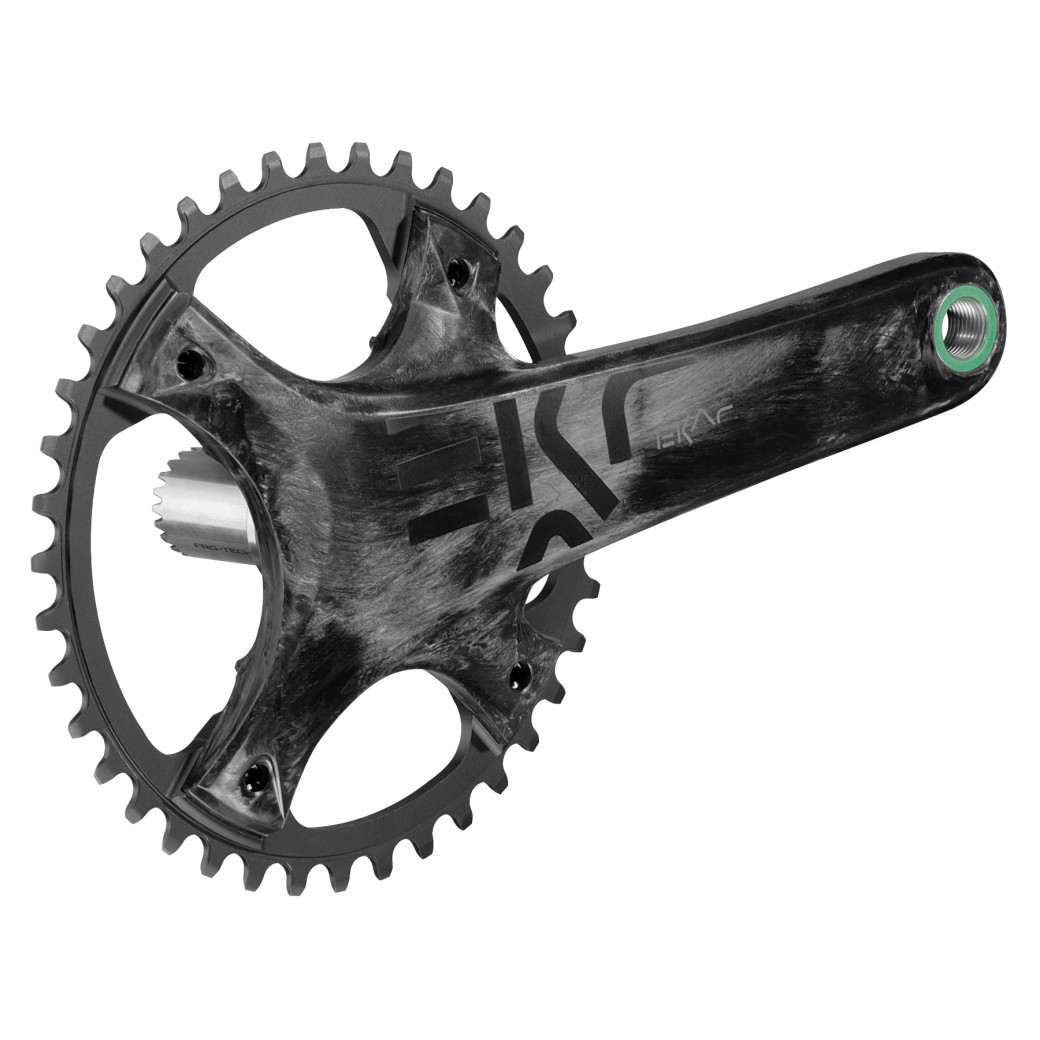 The levers maintain the classic Campagnolo philosophy of one lever, one action. In this case, the lever used to lower the sprockets is the most notable change compared to the road models, as it is larger and has a C-shaped design that makes it easy to reach from any position on the handlebars. Both levers have the ability to upshift or downshift up to 3 sprockets with a single press.

Minimalist Flat Mount calipers and 140 or 160 mm discs complete the package, allowing you to enjoy the essence of the Italian brand off-road as well.